Once again, it’s happening. The United States military – in this case, the National Guard, in concert with the U.S. Army Corps of Engineers and the oil industry – is waging war against the American Indians.

And once again, it’s a war involving land and minerals. The land is the Standing Rock Sioux Reservation in North and South Dakota, which partly pushes against the mighty Missouri River. Hunkpapa Lakota Sioux Chief Sitting Bull, murdered by Indian agency police on this very reservation in 1890, is buried close by.

This time, however, the mineral isn’t gold or silver.

Last week, 141 people were arrested after clashes with the Guard and police. The protesters had occupied private land to oppose construction of the $3.8 billion Dakota Access Pipeline (DAPL) by Texas-based Energy Transfer Partners, a pipe which will tunnel under the Missouri. There were reports of Molotov cocktails being thrown by protesters, pepper spraying and brutality by police, and gunshots by unknown individuals.

Big Oil and its supporters say the pipeline offers a more cost-effective and safer way of transporting shale oil from North Dakota to refineries on the Gulf Coast than it does by road or rail. They also claim it will create 8,000 to 12,000 local jobs.

They shifted the original route further away from Bismarck, and closer to the reservation, because they said its construction would be “easier.” (See map)

But many in the Standing Rock Sioux Tribe, who have been camping out near the proposed pipeline for months (and have been joined by other tribes and some non-natives sympathetic to their plight), argue that an oil spill in the Missouri will prove disastrous, since the people rely on the river for much of their water. Also, that the pipeline will desecrate ancestral land, basing their claim on a 19th-century treaty.

And environmentalists are dead-set against the pipeline for obvious reasons: the potential of a catastrophic oil spill, and the reality of a monstrous carbon footprint.

“The Native Americans are the only people who have inhabited this continent in harmony with nature for centuries,” conservationist, author, and 350.org founder Bill McKibben says. “Their traditional wisdom now chimes perfectly with the latest climate science.”

The Army Corps of Engineers fast-tracked construction of the pipeline last July, but it still needs to grant final permits. Due to the glaring spotlight on this most recent clash, the White House has granted a temporary postponement of the project.

Over 300 tribal nations have come out against the pipeline. The total number of protesters at the site has grown to over 800.

North Dakota Governor Jack Dalrymple (R) criticized the protesters for staging their protest on private land. A valid criticism for most of us. But… here are some questions:

Other entities, notably Big Oil and its backers, have charged that a number of protesters are “outsiders” who are unaffiliated with the tribe. Here are some more questions:

Why is this a negative? Aren’t we “our brothers’ keepers?” How noble are the motives of a corporate giant next to those of poor people struggling, not for monetary profits, but for clean water and tribal rights? If there’s an oil spill, will the Standing Rock Reservation be the only thing impacted? And when 800,000 gallons of oil per day are pounding through this pipeline to eventually be burned as fuel, ballooning the atmosphere’s carbon concentration even more, are there truly any “outsiders” in this scenario?

After Sitting Bull’s murder, 350 Lakota Sioux under Chief Spotted Elk walked away from reservations at Standing Rock and Cheyenne River (land which they’d been exiled to). They were upset at being denied their Ghost Dance, prohibited by U.S. officials, who referred to it as a “Messiah craze.” As at Standing Rock recently, the U.S. military was sent in. The troops, armed with rapid-fire Hotchkiss mountain guns, surrounded the Lakota near Wounded Knee Creek. Nobody knows who fired the first shots. But when the bullets stopped flying, 150-300 Indian men, women, and children lay dead in snow that was dyed red.

Wounded Knee was the last major confrontation of the Plains Indian wars. After this, the Sioux and most other tribes were a defeated people, their leaders killed, their land fenced off and privatized, their traditional food sources depleted, their cultural and spiritual practices ridiculed, their children forced to attend distant schools, dress like whites, and abandon their language. Most reservation Indians today live in abject poverty.

Nobody has yet died at Standing Rock, fortunately. But here’s one final question:

When money, land rights, and race are intertwined… has all that much changed in America in 126 years? 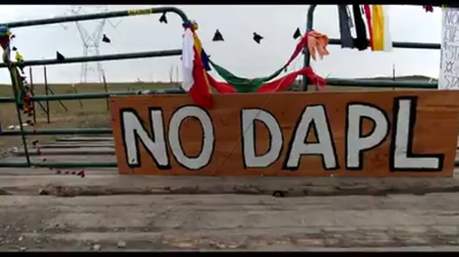 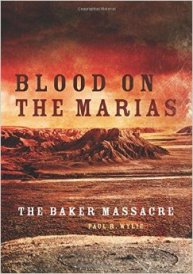 (I just read the new book “Blood on the Marias: The Baker Massacre” and reviewed it on Amazon. It’s a tragic story, but I’m sharing my review here because, even at this late date, I think it’s important people know what happened on January 23, 1870)

It’s hard to fathom. But there was a time when the U.S. government actively engaged in ethnic cleansing.

And U.S. military and political leaders actually pondered the idea of genocide… on American soil.

American Indian history isn’t taught much in schools today. And it’s easy to understand why. Our treatment of the aboriginals of this country is a dark stain which may never be erased. And one of the most appalling chapters in this sad saga is the story of the Piegan Blackfeet of northwestern Montana. “Blood on the Marias” deals with that chapter.

Most Americans have heard of Little Bighorn, even if they don’t know the details. Colorful cavalryman George A. Custer had his last stand here. But few Americans know about Sand Creek, Washita, Ash Hollow, Bear River, and Wounded Knee, where innocent Cheyenne, Sioux, and Shoshone women and children were slaughtered in the name of Manifest Destiny. And only a precious few historians know of the Marias Massacre, also known as the Baker Massacre. There’s a reason why this abomination has been kept secret: as shocking as the above episodes are, the bloody encounter on the Marias River in 1870 is perhaps the most shocking of all.

Author Paul Wylie came upon this story by accident, while researching for a previous book. But he’s produced the first comprehensive analysis of the Baker Massacre, and his scholarly treatment is long overdue. It evidently took him years to pry details of this massacre from the iron vaults of the National Archives, and from army correspondence papers, personal letters, and obscure newspaper accounts. He frames his examination of the massacre – in truth, a “mass murder” – with a solid history of the Piegan Blackfeet, including their fascinating and fortuitous 1806 encounter with explorer Meriwether Lewis.

We also get the all-too-familiar perfect storm scenario that led to the attack: the inevitable broken treaties, murders (on both sides), settler and newspaper hysterics, and heinous practice of whiskey trading by unscrupulous frontier lowlifes. This all dovetailed with a U.S. Army run by commanders who were hardened by the Civil War, who had a penchant for glory-seeking, and whose brutality was informed by racism at best, and sociopathic tendencies at worst (Sheridan and Sherman receive full treatment here).

Without giving away too much, the Baker Massacre had several things which separated it from similar atrocities against Native Americans: first, the Piegan village that was attacked was, at the time, being ravaged by smallpox; second, most of the Piegan braves had gone hunting, leaving primarily women, children, and elderly; third, the attack occurred at dawn, in sub-zero temperatures, with minimal resistance from the villagers (only one soldier was killed, with a minimum 173 Indians killed, although probably many more); fourth, the commander and many of the troops were drunk; and fifth… it was the wrong village.

Wylie, a retired attorney, must have really struggled to restrain his emotions while writing this book. He slips into subjectivity only once, in his Preface, when he describes what happened to those villagers as being one of the saddest things he’s ever encountered. The rest of the book is entirely objective and buttressed by credible footnotes.

The Baker Massacre is, indeed, incredibly sad. It’s also one of the most shameful incidents in this nation’s history. It’s been kept under wraps because the army wanted it kept under wraps. If you’re a history teacher, please devote class time to the history of Plains Indians and the Baker Massacre. If you’re not a history teacher, but enjoy reading about history… strike a blow for truth and get a copy of this book.