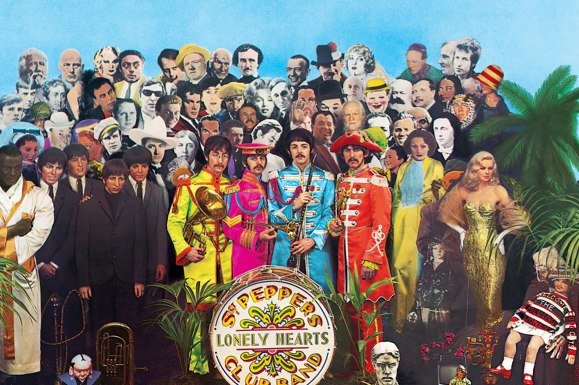 June 1, 1977. Forty years ago today, Mr. Turley cut me a break in calculus, and my high school released me.

Almost as important: ten years to the day before that, the Beatles released (in the U.S.) their spectacular album SGT. PEPPER’S LONELY HEARTS CLUB BAND!!!

I love lists, even those controversial and ubiquitous “Rolling Stone” magazine lists, and I can’t recall one rock critics’ list that hasn’t placed this album solidly in the No. 1 position. It’s considered by many the CITIZEN KANE of pop music, the ultimate radical experiment in an era of radical experimentation, yet not so experimental that it alienated the masses. This record’s historical standing isn’t exactly hurt by its association with the greatest musical ensemble in the history of the Milky Way (or, at least, the planet Earth).

Please don’t stand up and throw tomatoes at me when I say this: it’s not number one on my list (duck, Pete!). And since the Beatles excluded their single “Strawberry Fields Forever” / “Penny Lane” from the LP, I don’t even consider it the Beatles’ best record. Sonically, it’s very cohesive, maybe their most cohesive album as far as sound and mood. But many of the songs here fall short when stacked against the best work of their other LPs, even the earliest.  I’d pick “Please Please Me” and “This Boy” any day over marshmallow pies and Henry the Horse’s waltzing.

There’s a lot of Paul here, which is good, but John got a trifle lazy, which is not good. I think the adventurous instrumentation and packaging, and the timing of its release have had much to do with its current reputation. SGT. PEPPER kicked off the acid-soaked Summer of Love, which so many social historians and millennials love to associate with the entire 1960s. Also, the public was hungry for a new Beatles LP. The boys had quit touring, and it had been ten months since REVOLVER (today, it takes ten months for a band to decide whose song to sample).

SGT. PEPPER’S swirly, psychedelic motif hasn’t aged well, either, particularly on John’s song “Lucy in the Sky with Diamonds.” Producer George Martin truly came to the fore as the “fifth Beatle” on this record, so the music is as much him as the four lads. 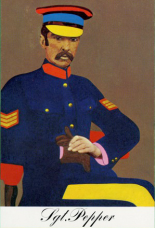 But… “With a Little Help from My Friends,” “She’s Leaving Home,” and “A Day in the Life” more or less created the mold for poetry and musicality in a four-minute pop song. In fact, classical giant Leonard Bernstein called “She’s Leaving Home” one of the three great songs of the century (does anyone know the other two?). A personal favorite of mine is Paul’s construction project, “Fixing a Hole,” where he allowed his mind to wander, and it’s very reminiscent of Brian Wilson’s beautiful, self-analytical song from the Beach Boys’ PET SOUNDS, “I Just Wasn’t Made for These Times.”

Since it’s summer and I’m too lazy to do a “Rolling Stone”-styled pontification on the cultural and musical significance of this record (the best recent article I’ve read about SGT. PEPPER, minus an annoying plug for the obligatory anniversary re-release, is here, if you’re interested), I thought I’d have some fun and offer a trivia contest. Like Mr. Turley’s exams, it’s open book. But the true Beatles fan shouldn’t need a book. Be careful, though! I have at least one trick question in case of a tie.

Hopefully, I’ll get more response than I did with my Gettysburg sesquicentennial quiz.

Thanks for participating! Just pop your answers into the longitudes comments section. I’ll list the answers and the winner(s) in a couple weeks. Till then, give this classic a spin, and I hope you all enjoyed this show! 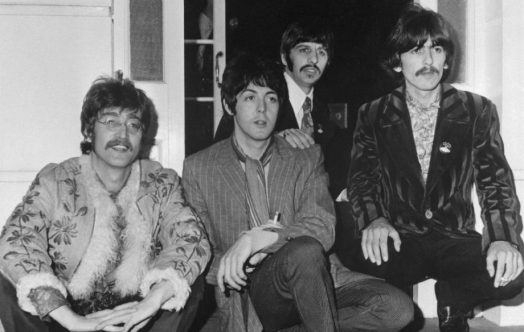 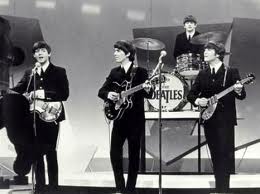 U.S. Press: Are you embarrassed by the lunacy you cause?

George: (giggling) We love it.

Thus started the first of many U.S. press conferences for the Beatles.  John’s witty remark “We like lunatics” was typical of the cheeky humor the band used to win over so many Americans, both young and old.  But the humor wasn’t necessarily strategic.  Although different personalities, all four really were fun-loving and outgoing, and excited as can be to be in the home country of their rock ‘n’ roll idols.  And throughout their career, they never let success get to their heads (just a few illicit drugs, that’s all).

The stamp of approval in middle America came when Ed Sullivan introduced them on Sunday night to a then-record setting 73 million television viewers.  Sullivan was respected and admired around the country.  If someone of his age and stature could showcase four long-haired English musicians with their amps cranked… well, they must be alright! 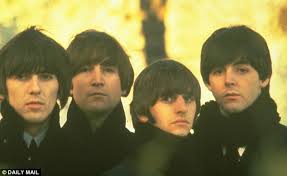 Before Sullivan could even finish his introduction, he was drowned out by the screams of the New York studio audience (their biggest fans, at least in the beginning, were 94.3 percent young and female).  Those of us watching on TV at home were transfixed.  Finally, we get to see them.  And they’re more exciting than we’d anticipated.  Dressed in tight-fitting, matching suits.  Paul beaming and bobbing.  George a little nervous, but harmonizing with Paul (he was actually recovering from the flu).  John stoic and in command.  And Ringo sitting high in the back, tossing his mop of hair to the beat.

The first song was “All My Loving.”  Next came “Till There Was You,” a tune from “The Music Man,” and which further endeared them to parents.  Then “She Loves You.”  Later in the show they did “I Saw Her Standing There,” and closed with their No. 1 hit, “I Want to Hold Your Hand.”

The Beatles’ first live appearance in America was an unequivocal smash.  A week later they did a second show in Miami Beach, where they posed with another cultural icon,  Cassius Clay (Muhammed Ali), who was training for a fight with heavyweight champion Sonny Liston.  A third show was aired on February 23 (though it was actually taped early in the day of their February 9 show).

A lot of people, primarily of the World War II generation, considered the Beatles a fad.  How could four kids from Liverpool with a fan base of fainting girls sustain any kind of artistic credibility?  The naysayers can’t be faulted too much, though.  Musical fads were around going back to the 1920’s and the Charlston, and they happen today every few years. 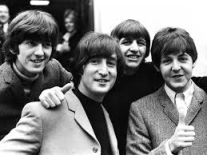 But the Beatles had sustainability because they wrote their own music, it was pioneering, ever-changing and had popular appeal, and they wrote a lot of it.  And, they had a visionary leader in John Lennon (and producer in George Martin).  Their appearance on “The Ed Sullivan Show” sent a shock wave throughout music and popular culture that continues to this day.  Folkies like Bob Dylan and the Byrds suddenly bought electric guitars.  Leonard Bernstein started dissecting their musical structures.  And thousands of kids across America started garage bands to emulate the British musicians that, after February 9, 1963, U.S. record companies were signing to contracts right and left.  Here are just a few of the musicians who followed the Beatles to American shores in the “First British Invasion”:

I hope you’ve enjoyed this three-part 50th anniversary tribute to the Beatles as much as I’ve enjoyed writing it (and reliving my childhood).  If you don’t have any Beatles records (hard to believe, but I guess it’s  possible), I urge you to treat yourself to some great music.  The Beatles are one of only a few artists whose music can be said to be “timeless.”  They appeal to all genders, ages, cultures, socio-economic classes.  The one message they stressed over and over was Love.  That’s really what it’s all about.

And in the end

The love you take

Is equal to the love you make. 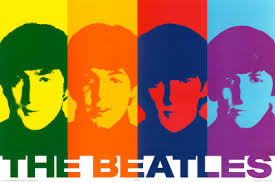