The lynching of black Americans had a long history, going as far back as Reconstruction. In the early 20th century, particularly in the Mississippi Delta, lynchings rose dramatically, in direct proportion to African Americans finding a foothold as sharecroppers and small landowners. It’s a fact that most lynchings occurred late in the year, when cotton accounts needed to be settled.

By June 1964, the state of Mississippi had the highest rate of lynchings in the country.

On August 4, 1964, after 44 days of searching by the FBI, civil rights organizations, and the U.S. military, the bodies of missing civil rights volunteers James Chaney, Andrew Goodman, and Mickey Schwerner were located. They’d been buried in an earthen dam on a farm near Philadelphia, Mississippi. Both Schwerner and Goodman had been shot in the chest at close range. Chaney had been severely beaten with a metal chain, then shot in the abdomen and head.

Later testimony showed that they had been followed in the night by the KKK and local officials, then stopped and terrorized before being killed. One of the killers had asked Schwerner if he was “that nigger lover.” Schwerner, drawing on skills he’d learned as a leader in the Congress of Racial Equality (CORE), tried to defuse the situation by responding “Sir, I know just how you feel.” But he was shot nonetheless.

Ten complicit in the murders

The murderers moved the bodies to Old Jolly Farm, owned by one of the killers, ex-Marine Olen L. Burrage. They then set the victims’ station wagon ablaze near a river along Highway 21.

The Chaney-Goodman-Schwerner case was the most sensational incident of what’s known as the Mississippi Freedom Summer. The three CORE volunteers were part of hundreds of college students, mainly white and from the North, who fifty years ago traveled to rural homes in Mississippi to register blacks to vote. Voter registration was focused on because Mississippi was largely rural, so busing and lunch counter desegregation weren’t big issues. Also, due to intimidation and chicanery by white officials, Mississippi had the lowest percentage of black voter registry than any state in the country; only 6.7 percent of eligible black voters in Mississippi were registered.

Along with registration, the Freedom Summer volunteers established Freedom Schools to educate black children and adults (white Mississippians had a vested interest in keeping black Mississippians ignorant). They also established a Mississippi Freedom Democratic Party to challenge the all-white, segregationist delegation scheduled to appear at the 1964 Democratic Convention.

They did all of this within a dark vortex of violence. Beatings, burnings, and bombings were a reality in 1960s Mississippi.

While the disappearance and murders of Chaney, Goodman, and Schwerner made national headlines, Mickey Schwerner’s widow Rita was quoted as saying that, had not two of the victims been white, the killings would never have created such commotion. In fact, during the search, Navy sailors who dragged local rivers uncovered at least eight bodies of young black men who had also been lynched. But their disappearances had not been deemed that important (see “Mississippi Cold Case,” a documentary about two of these murders).

The deaths of Chaney, Goodman, and Schwerner were not in vain. Only a year later, President Lyndon B. Johnson signed the Voting Rights Act, which enforced the Fourteenth and Fifteenth Amendments to the Constitution and ended racial discrimination at the voting booth, including eliminating literacy tests and poll taxes. Today, Mississippi has the highest percentage of African American elected officials of any state in the union.

(Note: only a year ago, a conservative majority in the U.S. Supreme Court, in Shelby County v. Holder, weakened the Voting Rights Act by effectively nullifying Section 5 of the Act.  This section had required certain states with a history of race bias in voting to submit any election changes to the federal government for approval before they went into effect)

Freedom isn’t free. It has to be fought for, and not necessarily on the battlefield. James Chaney, Andrew Goodman, and Mickey Schwerner were foot soldiers in a non-violent crusade to secure basic human rights for blacks in the most vicious corner of the Deep South. They tragically lost their lives, but their efforts, and those of the other young volunteers in the Mississippi Freedom Summer, put a massive stake in the heart of the idea of white supremacy.

Summer nights in rural Mississippi can be oppressively hot. The heat makes your skin stick to your clothes. Unfolding your arms and legs is like pulling Scotch tape from your skin. You always seem to be thirsty.

The Mississippi woods are filled with noise at night. As soon as the sun sets, the crickets and bullfrogs begin a loud, rhythmic chant. The sounds continue unabated for hours, long into the dark, until just before sunrise.

On the night of June 21, 1964, three young men drove a Ford station wagon through rural Mississippi. By sunrise they lay dead, buried like field compost by their killers. One can only wonder at the agonizing fright they experienced in the minutes before they were murdered. Did they smell the alcohol on their killers’ breath? Did they have an inkling of their fate?

Perhaps, by the time the shots finally rang out, they actually welcomed death.

What happened to James Chaney, Andrew Goodman, and Michael Schwerner on the night of June 21-22, 1964, at the hands of the Ku Klux Klan (KKK), was horrific, and their brutal deaths shocked the nation. The racially motivated crimes were just several of thousands of beatings, lynchings, and shootings which had been occurring in the Deep South since slavery ended. But it was their deaths 50 years ago that sparked a firestorm of outrage which finally helped eradicate the state-sponsored, legalized racism known as Jim Crow. 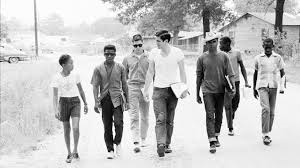 Other than being white males, Andrew Goodman and Michael Schwerner had little in common with their killers. They were educated, Jewish, and from New York. Goodman had been a classmate of singer Paul Simon at Queens College. “Mickey” Schwerner was an experienced social worker and had attended Michigan State, Cornell, and Columbia University graduate school. As a boy he’d befriended Robert Reich, later U.S. Secretary of Labor, and protected him from bullies. Members of the civil rights organization Congress of Racial Equality (CORE), Schwerner and Goodman had volunteered during the Freedom Summer project to encourage Southern blacks to register to vote.

The third, James Chaney, was also a member of CORE. He started volunteering in 1962 when he signed up as a Freedom Rider, traveling on interstate buses in the South to fight segregation. He also organized voter education classes, and had recently introduced Schwerner to black congregants of a Baptist church in Philadelphia, Mississippi, where Schwerner hoped to set up a voter education drive.

Chaney did have something in common with his murderers: he hailed from a small town in Mississippi (Meridian). But, unlike them, his skin was black.

On Memorial Day 1964, Schwerner and Chaney met at Mt. Zion Methodist Church in Longdale, Mississippi. They talked to the audience about setting up a Freedom School for blacks. A very different audience, an aggressive wing of the KKK known as the White Knights, later heard about the talk. Doing what they did so well – spreading hatred and terrorism – the White Knights decided to set fire to the church. After the burning, Schwerner, Chaney, and Goodman traveled from Meridian to Longdale to view the church’s charred remains, and also to reassure local blacks.

On June 21 they began the return journey to Meridian.

But early in the evening of June 21, a tire on their station wagon went flat in the town of Philadelphia. This stroke of bad luck enabled the Neshoba County cops to jail them on a trumped up charge of speeding. The threesome were eventually released, but they were refused permission to make their legally permissible one phone call. Worse, by the time they started on the road again, a mob of about 18 members of the White Knights had formed. The mob included the so-called protectors of law and order – the police – as well as a so-called minister. They’d heard about these three CORE workers stirring up trouble around Neshoba County. One of the Knights referred to them as representatives of a “nigger-communist invasion of Mississippi.” [Don Whitehead (September 1970). “Murder in Mississippi.” Reader’s Digest: 194.]

Chaney, Goodman, and Schwerner left the Neshoba County Jail at about 10 pm. It was dark. The crickets and bullfrogs had begun their nighttime chorus.

Later testimony revealed they initially traveled south along highway 19. They were hoping to reach Meridian without further incident. For some reason, however, they turned westward onto highway 492. Maybe they’d made a wrong turn.

Or maybe they were trying to elude the headlights behind them.

Thoughts about community, learning, and life.