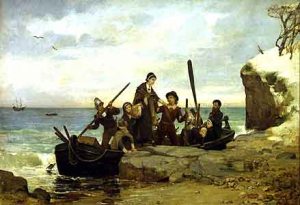 This Thursday, November 22, Americans will get together with family and friends to celebrate a national holiday, Thanksgiving.  It’s a day associated with a feast of roast turkey, stuffing, cranberry sauce, and pumpkin pie.  Oh yes, and televised football games.  American schoolchildren will learn about the Pilgrims: religious dissenters from England who landed at Plymouth Rock in 1620, and who shared a table with friendly, benevolent Native Americans.

Thanksgiving is many Americans’ favorite holiday, because it’s all about family, food, and football (not necessarily in that order).  But there are, not surprisingly, a lot of myths about the Plymouth colonists and the original day of thanks in 1621.

Below is my feeble attempt to “set the record straight.”  My sources are the book “The Times of Their Lives: Life, Love, and Death in Plymouth Colony” by James and Patricia Deetz; and a 1621 letter written by Mayflower passenger Edward Winslow to a friend in England.  His letter is the only contemporary eyewitness description of what took place that first Thanksgiving:

Oh, and one other thing: the colonists did not watch American football on television on the first Thanksgiving.  If they had, however, they would have certainly cheered for Detroit to win and Dallas to lose.

Have a Happy and Healthy Thanksgiving!

The results of the 2012 U.S. presidential election are in.  Just a few thoughts before moving on to a more subdued topic.

This was the most expensive election in history.  According to the non-partisan Center for Responsible Politics, the presidential and congressional campaigns raised a total of $6 billion – $700 million more than the previous record in 2008.  This thanks in part to an abominable Supreme Court decision, Citizens United v. Federal Election Commission, that said that government restriction of political expenditures from individuals, corporations, and labor unions was a violation of the First Amendment to the U.S. Constitution (popularly known as the “right to free speech”).  Why Super PACS (Political Action Committees) being allowed to dump millions into the candidate of their choice is considered “speech” is a question for the ages.  Regardless, all that money shifted just a few seats in the House and Senate.

President Barack Obama won election to a second four-year term, while Democrats gained some seats in the Senate, which they control, and also in the Republican-controlled House of Representatives.  Obama was handed an awful mess in 2008, and in four years he did an extraordinary job of putting the U.S. back on track, while facing unrelenting hostility and vitriol.  The housing market is stabilizing; unemployment is still high but down to the level of when he took office; the Iraq debacle is over; we’re winding down in Afghanistan.  His signature achievements were killing Osama Bin Laden and stifling terrorism, rescuing the U.S. auto industry, and the historic passage of the Affordable Care Act (Obamacare), designed to enable countless Americans access to quality, affordable health care (and is not the “government takeover” claimed by his critics – there’s not even a “public option”).  And we finally have a leader who isn’t timid about pushing for green energy.

But America is still at roughly 8 percent unemployment, there is still a large budget deficit, and there are still tax and immigration dilemmas.  The president needs to find a way to bridge the gap with stubborn Republican House members, who have signed a “pledge” not to raise taxes – even on the wealthiest Americans.  And Republicans will want Dems to address entitlements.  House majority leader John Boehner has promised his GOP members will work with the president to somehow find compromise, which is a good sign.  We’ll see.

The election was a resounding victory for Democrats and a thundering disappointment to Republicans.  If the GOP is going to maintain viability in the 21st century, it will need to embrace a changing demographic, one that includes blacks, Latinos, Asian-Americans, gays, young voters, and women.  It will also need to re-examine its ideologies.  Is active government necessarily “big government,” or can it improve the lives of Americans?  Is regulation of business and industry such a dirty word?

If the economy continues to improve and the president can somehow find common ground with an intransigent Congress – and this country can stay out of another war – I think history will view Obama’s presidency with kindness.