My obsession started innocently enough. It was a quiet Saturday night at home. Lynn and I had nothing planned. No social engagement, no movie, no weekend junket out of town. It was “stay-at-home” night, a frosty January evening with a burning log in the fireplace, a wine cooler for her, and a couple Yuenglings for me (ok, maybe three Yuenglings). 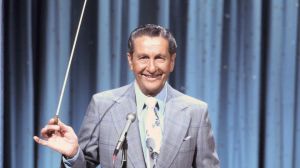 The maestro himself: Lawrence Welk

At 7:10 PM EST we turned on one of our favorite TV stations: PBS. There, on the screen, were three men tap dancing in perfect synchronicity. They wore matching suits – er, costumes: shiny black shoes, tight purple slacks with bells at the bottom, lavender satin shirts with puffy lapels the size of small pillows, and shirtsleeve cuffs almost as large. The best dancer – I later discovered his name was Arthur – was black. The most eye-catching dancer was a tall white guy with stiffly erect posture, perfectly sculpted hair, and a huge, frozen grin straight out of a toothpaste commercial.

I’m not sure if it was me or Lynn who laughed first. I’m sure I laughed the loudest (remember, I was nursing several beers). We ended up watching the entire show, smiling and wisecracking the entire time. Occasionally Lynn would Google one of the cast members to learn about his or her scandalous private life.

Anyone over the age of 45 or 50 knows about “The Lawrence Welk Show.” This American television program ran from 1951 to 1982. Its host was a big band conductor who had a distinctive accent. The accent was sort of German-sounding, but it had gotten hijacked somewhere by Russia and North Dakota (!). Welk was famous for his catchphrase “Wunnerful, wunnerful!” and his song introduction of “Ah one, and ah two, and ah…” The music on the show ranged from polka tunes to novelty songs to big band standards. Colorfully costumed skits with low-budget props were liberally sprinkled into the program. 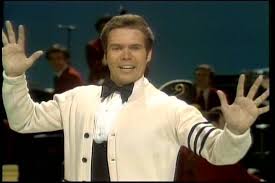 Sometime during the show’s long run, the music acquired the descriptor “champagne music.” Welk even selected one of his singers as the “Champagne Lady,” one Norma Zimmer, who had a pure, high-range soprano voice. Other notable regulars, which Welk called his “Musical Family,” included tap dancer Arthur (Duncan), who was the first African-American regular on a variety TV show; accordionist Myron Floren; legendary Dixieland clarinetist Pete Fountain; the four Lennon Sisters, who were as sweet and homey as apple pie; frenetic honky-tonk pianist Jo Ann Castle; and former Mouseketeer Bobby Burgess – the guy with the frozen grin. 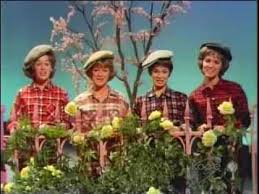 Welk deliberately aimed his show toward a specific (and loyal) audience: white, Midwestern conservative, Christian, and definitely older. So it’s not surprising some of the principal show sponsors included Geritol (a dietary supplement marketed to elderly people), Sominex (a sleep aid), and Polident (a denture cleanser).

But Welk himself could be a harsh taskmaster. He fired his original “Champagne Lady” because he thought she showed too much leg. Pete Fountain quit after he was chastised by Welk for trying to jazz up a Christmas number. Fountain was later quoted as saying “Champagne doesn’t mix with bourbon.” 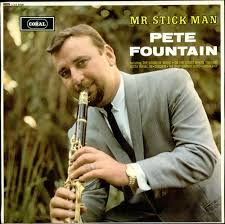 I guess at this point I should elaborate on the “appeal” of Welk for me. Why do I like the show, which is now in syndication on PBS? Well, there’s the nostalgia aspect. This show was part of my childhood DNA. If my folks weren’t playing bridge or at a dinner party on Saturday night, Welk was usually on – at least for a few minutes. My dad loved good big band jazz (e.g. Benny Goodman, Artie Shaw, Count Basie). And even though he referred to Welk’s style of music as “schmaltz” – and my mom still calls it “fruity” – it was probably the closest they could get to their halcyon youth in the 1930s and ’40s… at least on television.

The other reason I like Welk is that, no matter how staid or cheesy the entertainment might be, it has a high “feel good” factor. For an hour, “The Lawrence Welk Show” is a great way to forget the stresses in life. I recently discovered that, of all people, the writer and infamous hermit J.D. Salinger (“Catcher in the Rye”) used to dance along with the Welk program. Maybe he found some joy here to leaven some of the darkness in his life.

You see, Welk’s music and skits are always upbeat. They may be corny, but they’re never sardonic or snide, like so much post-“Saturday Night Live” entertainment today. The performers are always smiling and really seem to be having fun. And the champagne bubbles are always floating. Right along with my beer suds.

Thoughts about community, learning, and life.