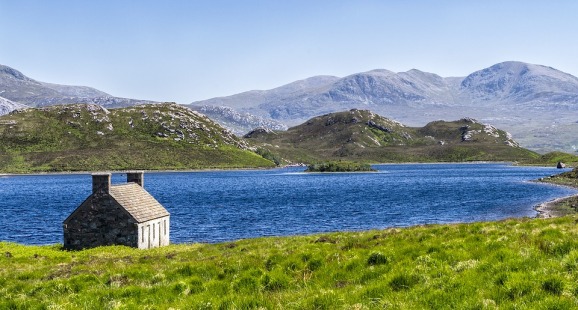 This is the third installment in my travel-to-Scotland series. Most travel essays read like toothpaste commercials, so I’ve tried to jazz up mine with some subjective asides. After all, it’s not just about geography, food, culture, and hotel accommodations, it’s also about how all these affect each personality, and personalities are different, including distorted personalities like mine.

With Longitudes, you get the good, the bad, and the self-indulgent.

While in Scotland, I tried to mix town with city with country. I’ve already discussed Milngavie (“Mull-guy”), Glasgow, and Edinburgh, so now I’m leaving the pavement and discussing some trails. Specifically, Ben Nevis and the West Highland Way.

Ben Nevis: Mr. Nevis isn’t a person, he’s a mountain. His name is an anglicization of the Gaelic Beinn Nibheis, which means “malicious mountain.” Having summited Mounts Whitney and Washington in the U.S., I didn’t find him malicious at all. In fact, he was more like a large teddy bear. My old school friend Tad had summited him years ago, and since we Kiski boys (“Faith, Humility, Tolerance”) are a competitive lot, I felt compelled to plant my own invisible Kiski flag alongside Tad’s.

I struck out early Sunday morning with my son-in-law, Mike. We drove from Milngavie to Fort William, a several-hour-drive (see map below). Ben Nevis Mountain Path starts at a car park outside Fort William, and meanders across fields of grazing sheep, gradually rising up toward the clouds.

Big Ben is the highest mountain in the British Isles, at 4,411 feet (1,345 meters). Most hikers summit and return in a day, so there are no camping areas, huts, signs, or other evidence of man’s tinkering. Just a gentle, rocky trail and a few cairns for directional help. The only eyesore was a clear-cutted mountain slope to the southeast, but we soon left this far behind us. 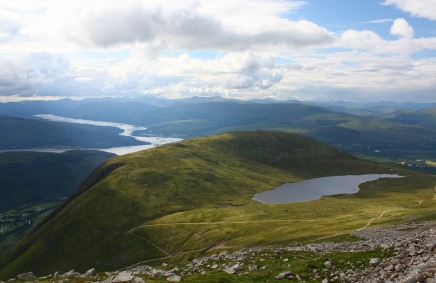 View from about halfway up Ben Nevis

Mike was much faster than me, a Ferrari compared to my Ford Fiesta. But he waited at the top, waving me over to where he sat amongst a small crowd at the base of a large cairn near an emergency shelter. We peeked inside this shelter, intended for climbers who might be stranded atop during bad weather. Pretty dismal; nothing more than a coffin-like hole in the rock to protect from wind and rain.

Also atop Ben Nevis: “…(A) piano that had been buried under one of the cairns on the peak was uncovered by the John Muir Trust, which owns much of the mountain” (Wikipedia). Amazingly, the piano was evidently carried up 20 years earlier as a charity project by some enterprising men from Dundee. This stunt sounds suspiciously like a Monty Python skit—I picture Cleese, Idle and company with red beards and kilts—but it’s a fact. “And now for something completely different.”

We returned to our car in late afternoon, a perfect day hike. Our muscles ached for several days afterward. But it was a good pain.

West Highland Way (WHW): there are many hiking trails in Scotland, but this is the longest and most well-known, with distance backpackers arriving from all points on the globe. The trail starts in Milngavie (where our daughter lives), north of Glasgow, and runs northward through western Scotland to Fort William, a total of 96 miles, or 154 kilometers (see map). It encompasses farmland, forests, lochs, villages, and mountains.

I allowed myself a good week to recover from Ben Nevis, and planned a two-day solo hike. Luckily, it coincided with the two warmest and sunniest days of my whole visit.

It was only a ten-minute walk from Holly’s house to the trailhead, located about a half-mile from the official start in Milngavie. Though my standard practice is to hike alone, at the trailhead was a young man adjusting his pack straps, we got to talking, and we ended up hiking together all day. His name is Johannes, and he’s an environmental microbiologist originally from Heidelberg, Germany. He had just finished attending a nearby conference, and wanted to explore most if not all of the WHW. 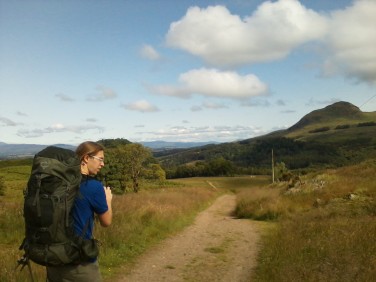 Unlike Ferrari Mike, Johannes was closer to my cruising speed. Leaving the environs of Milngavie, we passed by Mugdock Country Park, the side trail to Mugdock Castle (see my August 1 post) …then practically bumped into River and Alistair (River is Holly’s golden retriever, and Alistair is a retired gent who regularly walks him). We were a good two miles from Holly’s house, and I was impressed with Alistair’s devotion to his job.

One thing I learned about the Scottish is that they not only love dogs, they love to ramble. The U.S. is one of the most corpulent societies on earth (28.8 kg/m2 body mass index), and I’m convinced we’d be a helluva lot healthier—physically and mentally—if we rambled more.

After coming in view of the Campsies Fells (hills) and passing Craigallien Loch, a small lake that looked ripe for some fishing action, we took a short break where a road called Ballachalairy Yett crosses the trail. Near the Yett is a picturesque cottage painted in brown and red called The Shire. I’d seen it earlier in the week while on a morning run. Although I think it’s a hostel of some sort, I’ve been unable to find any information on it. (If anyone knows anything, please leave comment.)

While resting and munching on snacks, Johannes and I met Timothy, who was making a delivery to The Shire. When Timothy found out we were from outside Scotland, he asked us our views on controversial Brexit, which Scotland is overwhelmingly opposed to. This topic led to Boris Johnson, then Trump, then the far-right German AfD party, then climate change, then Native Americans.

In the states, I avoid verbal political conversations with people, whether friends, neighbors, or co-workers. We’re so polarized in America, these talks invariably result in blood pressures rising, or worse. So I was amazed at, not only Timothy’s cheekiness, but also how the three of us had consensus. I may have to leave my home country; there are actually people with clear heads! Needless to say, it was very refreshing. If a Scotsman, German, and American can break bread like this, maybe there’s a glimmer of hope for our planet. And it’s yet another reason we Yanks need to ramble more.

(You can pay me later, Rick Steves.)

Later in the day, Johannes and I made a second stop at a collection of rowhouses along Gartness Road near a stone bridge. Someone had placed a cooler outside one of the houses, stocked with refreshments for hikers, with payment on the “honor system.” We rested here about 15 minutes, listened to the trickling waters of Endrick Water stream, and I had a refreshing watermelon ice lolly (popsicle). Not a single vehicle or person in sight. Ahh, such peace!

After this came a long trek along Gartness Road, where we shared cramped space with several ultra-modern and ultra-large farm tractors. Then Garadhban Forest, where we lunched in a shady grove and met a winded hiker about my age from Perth, Scotland. Both Johannes and I were also feeling tired, so we decided on a shorter alternate route to the main WHW, our intended destination a public campground on Loch Lomond shore, northwest of Drymen (see map).

This alternate trail followed a boring road stretch through the small village of Balmaha, and bypassed Conic Hill, one of the higher points along the southern WHW, and which (I found out the next day) offered a stunning view of south Loch Lomond.

Loch Lomond has many irregular-shaped islands, and I’d heard rumors about an 11-acre nudist colony on one of the largest. Since I was doing an out-and-back hike, I vowed to determine the naked truth of this tomorrow.