Just returned from a pleasant hiatus in Scotland.  Scotland isn’t the Moon, but the hobbits and elves made it exotic nonetheless, and I’ll be writing about Middle Earth soon. But I want to at least offer a nod to Apollo 11. I feel a kinship with moonwalkers Armstrong and Aldrin.

Armstrong lived only nine miles from our place here in Ohio, and I briefly attended college with his son, Rick, who hosted a campus radio show. (He played a lot of…what else?…progressive rock.) And Aldrin was born in the same town as me: Glen Ridge, New Jersey. In fact, we were born in the same hospital, 28 years apart. I’ve been called “Buzz” myself, though probably for reasons other than Aldrin.

Others know more about space exploration than me, so I’ll stick with what I know and offer a short review of a favorite Moon-related movie. I saw it with my dad when I was six years old, the first flick I ever saw at the theatre…not long before Mary Poppins. It’s a cinema version of H.G. Wells’ science-fiction classic, First Men in the Moon.

Partial Plot: an international crew lands on the Moon and discovers a tattered Union Jack flag. A handwritten note with the flag says the Moon was claimed for Queen Victoria in 1899 in honor of Katherine Callender (Martha Hyer). The world press rushes to England to locate Callender. Although dead, her husband Arnold Bedford (Edward Judd) lives in a nursing home. The staff at the home say that Bedford is crazy, since for years he’s been raving about being on the Moon. He then relates to the press his actual experience traveling to the Moon 65 years earlier with Katherine and an eccentric inventor named Professor Joseph Cavor (Lionel Jeffries). This reminiscence provides a flashback for the bulk of the movie (which I won’t give away).

Aside from being my first theatre movie, this flick is special for many reasons:

This film was recently shown on Turner Classic Movies to honor the 50th anniversary of the first Moon landing, so it may be awhile before it returns. But if you have NetFlix or other, check out this under-appreciated film, enjoyable for both children and adults.

Neil Armstrong: “That’s one small step for man, one giant leap for mankind.”

Translation: “That’s one small step for mankind, one giant leap for mankind.”  Did the Selenites understand his verbal gaffe? 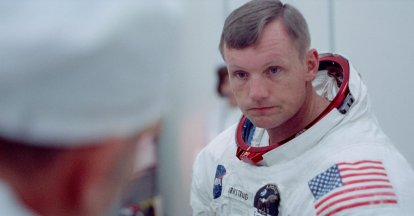 Co-worker: “I’ve noticed that photo of Martin Luther King that you use as your Skype identifier. I’m assuming you admire him?”

Co-worker: “Ever hear of the black lawman Bass Reeves? I read about him in my NRA magazine.”

(I’m not sure how Bass Reeves relates to Martin Luther King, Jr., other than both men were black. I’m also not sure why he specified his NRA magazine, other than he knows I despise that gun organization. But I immediately thought “There’s some psychology going on here.” Regardless…)

Co-worker: “He was a former slave who became a lawman in Oklahoma. Arrested his own son. He’s also the inspiration for The Lone Ranger.”

TV version of The Lone Ranger, with masked man, Tonto, and Silver

My co-worker then pulled up a Wikipedia bio of Reeves and read aloud from it. I returned to my cubicle. Work being non-existent, I did my own research on Bass Reeves (1838-1910). It took me all of ten minutes of internet clicking to get the lowdown.

In 2006, a professor and historian named Art T. Burton published a biography of Reeves entitled Black Gun, Silver Star: The Life and Legend of Frontier Marshal Bass Reeves (Race and Ethnicity in the American West) (University of Nebraska Press). In his book, Burton cited a 1997 book by John W. Ravage that asks the question “Could Bass Reeves be the prototype for the Lone Ranger character?” Burton wrote that, although Ravage’s claim cannot be “conclusively” proven, Reeves “is the closest real person to resemble the fictional Lone Ranger on the American western frontier of the nineteenth century.” (Burton, p. 14).

Burton made five “suggestions” in his book’s first chapter to back up his claim that Reeves is “the closest real person”:

Since his book came out, some people have taken Burton to task for questionable research and nuanced writing. The nuance arises from the fact that Burton doesn’t outright say Reeves is the prototype, just that the two strongly resemble each other; but his implication is apparent, especially when taken in conjunction with his use of the Ravage quote. One who delved into this implication is an award-winning radio and television historian named Martin Grams, Jr., who did his own research for a 2018 publication, “Bass Reeves and The Lone Ranger: Debunking the Myth.”

Regarding the first two of Burton’s suggestions—and assuming they’re true—Grams notes that Reeves would not have been unusual among frontier lawmen in concealing his identity while hunting fugitives. Nor was he unusual in employing Indian scouts; both lawmen and the U.S. Army did this. And one doesn’t have to be Judge Judy to see how tenuous Burton’s last three suggestions of resemblance are.

But the most damning argument against Burton’s implication are typewritten letters Grams uncovered from 1932-33 by Kunsky-Trendle Broadcasting Corporation, the company that created The Lone Ranger for radio. These letters specifically mention fictional character Zorro and cowboy movie star Tom Mix as sources for The Lone Ranger.

There is no mention of Bass Reeves in these letters. Would radio writers and executives have even known about Reeves, considering that in the 1930s most black cowboys and lawmen were barely footnotes?

Here’s the real problem, though: if Burton’s book had sold copies like my blubber book had, his cavalier conjectures would have been lost in the ether. But unlike my book and Ravage’s pre-internet book, Burton’s was read and discussed by a lot of people. Soon, like a prairie brush fire, a myth spread that The Lone Ranger was modeled on an African American, exploding on blogs, consumer book reviews, reference sites like Wikipedia, and magazines…including certain publications by certain lobbyist groups (see above). Burton even managed to sell his implication to the highly regarded Old West magazine True West.

Compounding the problem of an unsubstantiated rumor “going viral,” many readers of Burton’s (carefully chosen and suggestive) words lack the discernment to separate conjecture from fact. Still others, anxious to further a cause, set aside any doubts and enthusiastically embraced a kernal of wild speculation, turning a fiction into their own fact and proceeding to sound the trumpets.

For many years when I was younger, there was a myth that television character Eddie Haskell (Leave it to Beaver) was played by glam rock star Alice Cooper. That myth was silly, but fun (except perhaps to actor Ken Osmond, who actually played Eddie Haskell). This myth is more sinister, because it pushes American history closer to dime novel territory.

As Grams writes, “Historians are expected to present only the facts to avoid spawning rumors, misconceptions and myths that ultimately take decades to debunk.” Mr. Burton violated his responsibility as a historian by deviating from fact and making a reckless speculation. In many people’s minds, now, The Lone Ranger was modeled on a black man. A probable fiction.

This story interests me because it not only deals with U.S. history, but also ties together many disturbing social trends: the prevalence of fake news, political (in)correctness, racial emotionalism, historical revisionism, the power of social media in fueling myth, and an increasing lack of critical analysis by readers, listeners, and viewers. My co-worker seems like a smart guy, despite being an NRA member, so he should have been more careful.

Most historians and academics are trained to use reliable and objective sources that can be verified. Their peers expect this and will go to great lengths to verify truth is being disseminated (or as close to truth as is possible). I would have never been able to sell my blubber book to an academic press had I not done the nitty-gritty and been conscientious of reliable bibliography and footnotes. And a good editor would have bled red over any conjectural passages.

It’s an unfortunate fact that American history has been horribly skewed (to put it mildly) against ethnic minorities: blacks, Hispanics, Asians, and—without a doubt—native Americans, who not only had to deal with U.S. government-sponsored ethnic cleansing, but John Wayne movies as well. But if we don’t adhere to truth, we’re a boat without a rudder, careening from one rocky shore to the next.

Bass Reeves is a fascinating historical figure; a black law officer in the American West who defied stereotype, and who deserves to be known by more people. His story is interesting enough without being embellished by a well-meaning but overzealous historian with socio-political concerns.

Postscript: later in the day, I presented this information to my co-worker. With a straight face he said “Well, if they based The Lone Ranger on Tom Mix, and since Tom Mix lived out west while Reeves was still alive, Mix may have known Reeves, and he might have told those radio guys about Reeves, who then created The Lone Ranger partly based on Reeves.”

I returned to my cubicle.