While laid up after my surgery, I read several books. One is a biography of writer and environmentalist Wallace Stegner. This book was sent to me by my WordPress friend Cincinnati Babyhead. (One day I’ll have to ask about his pen name, considering Cincinnati is a long way from his domicile in Vancouver, British Columbia.) Babyhead had read my magnum opus Evergreen Dreaming, and saw that I had included an epigraph by Stegner.

(This is one of the great things about blogging: establishing a “cyberspace” relationship with a stranger based on a mutual interest. Not to mention sharing, and learning. Not to mention that, occasionally, some strangers will urge me to place my head in closer proximity to where my surgery was.)

Anyway, when I inserted that epigraph in my book, I knew very little about Stegner. My only prior knowledge came from the pages of Sierra Magazine. I’m a member of the environmental organization Sierra Club, as was Stegner for many years, and the club’s member periodical often features perceptive essays and quotes by him. 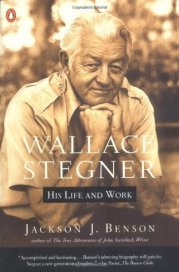 I find it a minor crime that the name “Wallace Stegner,” and his achievements, are not known to more people…including me, for a long while. So here’s a short tribute to him, with gratitude toward Vancouver’s Babyhead.

Most people have heard of Ken Kesey. He wrote One Flew Over the Cuckoo’s Nest, then gained infamy as a Merry Prankster riding a psychedelic bus through the pages of Tom Wolfe’s classic of New Journalism, The Electric Kool-Aid Acid Test (1968). But many don’t know that Kesey studied creative writing at Stanford University under Wallace Stegner (as did writers Larry McMurtry, Edward Abbey, Wendell Berry, Evan S. Connell, and many others).

Other than producing some of America’s finest literature, Kesey and Stegner couldn’t be more unlike.

Wallace Stegner was born in rural Iowa in 1909. He had a brutish, bullying father who yanked the family from one place to the next in search of quick, easy wealth. (Stegner’s 1943 novel The Big Rock Candy Mountain examines this restless quest.) Stegner’s most vivid childhood memories were formed in an isolated town called Eastend, in flat and rural Saskatchewan, Canada. Here, he learned hard work and how to hunt and fish. He learned how a cold prairie wind could slice through a person like a sickle through a snowdrift. He learned loneliness and deprivation, but also resourcefulness. A small boy on an immense prairie under limitless sky, Stegner early on gained a respect for the awesome majesty of the outdoors.

George Stegner zigzagged his family across the American West until settling in Salt Lake City, Utah. Young Wallace was able to find some permanence here. He excelled in school and on the tennis court, and loved to hike and camp in the sagebrush canyons and gingerbread flanks of the Wasatch Range of the Rockies. Although taking a dim view of the Mormon faith (and “denominational narrowness” in general), he made many Mormon friends and gained a lifelong respect for their solidity of character, love of family, and emphasis on roots, eventually writing two acclaimed books on Mormon history. This idea of the importance of history and roots would crop up again and again in Stegner’s work.

He attended University of Utah, then earned a master’s and doctorate at University of Iowa, where he met Mary Page, who would be his wife for 60 years. While in school, he learned his father had left his mother while she had cancer. (George Stegner later killed himself, after murdering his mistress.) For the rest of his life, Wallace battled the ghost of his father, while simultaneously drawing on memories of his mother’s affection and strength.

Wallace and Mary eventually moved to Vermont, where he honed his writing at the famous Bread Loaf writers retreat, which also counted Robert Frost, Willa Cather, and Bernard DeVoto among its faculty. He fell in love with the untrammeled green beauty of Vermont and simplicity and self-sufficiency of its residents. He became close friends with the prickly but brilliant DeVoto, and later wrote an acclaimed biography of him, The Uneasy Chair (1974).

While many writers concentrate on one form—fiction, nonfiction, short stories, poetry, history, biography—Stegner refused to be limited. He won three O. Henry Awards for short fiction, a National Book Award for The Spectator Bird (1976 novel), and a Pulitzer Prize for Angle of Repose (1971 novel). His biography of Colorado River explorer John Wesley Powell, Beyond the Hundredth Meridian (1953), has been called “one of the most influential books ever written about the West.”

In 1946 he founded the creative writing program at Stanford University, and mentored hundreds of student-writers for the next 25 years. He retired in 1971, wearied by students (like Kesey) who he felt undervalued the virtues of diligence, and who were obsessed with the “Now” and had scant appreciation of history, tradition, permanence, and place, in either their lifestyles or writing. 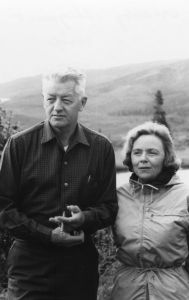 Some have ranked Stegner with John Steinbeck. He’s been called the “dean of Western writers.” His admirers argue he’s not better known due to an elitist Eastern literary press. For years, The New York Times snubbed him. In fact, after he won the Pulitzer for Angle of Repose, the newspaper clumsily hinted he was undeserving.  (On the 100th anniversary of Stegner’s birth, the Times did offer a small mea culpa.)

And while Wikipedia lists Stegner’s many awards and publications, its biography of him seems woefully brief. For proof, compare Stegner’s Wikipedia bio to 25-year-old pop star Justin Bieber’s. (On second thought, don’t ruin your day.)

While this woeful scribbler has shamefully yet to become acquainted with Stegner’s fiction, biographies, or histories, I am familiar with his articles, having read his collection, The Sound of Mountain Water (1969). One of the essays here is Stegner’s famous public letter urging passage of the Wilderness Act, eventually made law in 1964. In this letter, Stegner—who in the 1950s assisted David Brower of the Sierra Club in blocking construction of Echo Park Dam and saving Dinosaur National Monument—writes eloquently:

“Something will have gone out of us as a people if we ever let the remaining wilderness be destroyed…We simply need that wild country available to us, even if we never do more than drive to its edge and look in.”

Wallace Stegner’s accomplishments during his 84 years are beyond impressive. He was the first person to destroy the myth that the West is a land of rugged individualists, instead arguing it is a cooperative idea, and should be cherished and preserved rather than exploited by private interests.

He was a novelist, biographer, Western historian, seminal environmentalist, and beloved teacher. He was special assistant to Secretary of the Interior Stewart Udall. He had a work ethic that makes most of us look like panhandlers.

He was also a man of principles. A liberal of the old-fashioned variety, when Stegner received a National Endowment for the Arts award not long before his death in 1993, he refused it on the grounds that the NEA was being manipulated by political conservatives. “People like Patrick Buchanan and Jesse Helms have been attacking it for a long time,” he said, “and the (G.H.W. Bush) administration played into the pressure…You can’t conduct arts with censors…”

Those who block dams, shatter myths, and spurn awards while standing on principle are rare birds, indeed, and deserve to be celebrated.

I’m pleased to announce that my recent book, Evergreen Dreaming: Trail Tales of an Aging Hiker (aka “Ed”), was selected for a review by the venerable trade magazine Publishers Weekly. Only a small number of self-published books are selected for such a review.

Publishers Weekly (PW) has been around since 1872 and primarily serves booksellers, libraries, publishers, and agents. The reviews are generally short plot summaries, and can be favorable or unfavorable. Fortunately, Ed’s review was favorable.

While I’m grateful to whomever read and reviewed Ed, I wish he or she had read the entire book instead of just the first section (my hike through Georgia and North Carolina). I also wish the reviewer had been more careful with relating the narrative, since there are a few mistakes.

Despite the mild quibbles, I’m still grateful for a positive review, and here is a replicate of it.  Thanks to all of you who bought Ed, for those who plan to, and for those not interested but who still visit longitudes!

Kurtz, a 55-year-old technical writer (“Bluejackets in the Blubber Room”), hikes from Georgia to North Carolina along the Appalachian Trail in this entertaining travelogue. His love for nature started as a teen camping with his family in the Blue Ridge Mountain; now, his wife, Lynn, supports him in his hiking endeavors, but worries about his quest at his age. Kurtz makes several friends along the way (among them, Dylan, a 24-year-old realizing his dream to hike the entire trail, who joins Kurtz for a couple days), and describes the scenery (“a long, flat stretch with lots of overhanging rhododrendon that offers a nice shady canopy”). Along the way, he argues for wilderness conservation, noting that only 3% of the 2,200-mile trail is designated wilderness and warning that open spaces are threatened. Kurtz also discusses his affinity for reading (“The Adventures of Huckleberry Finn”), his love for the Beatles, his desire for hot water, and his reliance on sturdy walking sticks (one of which he names “Kip”)—and he always makes sure to call Lynn to share his experiences. Kurtz’s charming memoir encourages wilderness purists to chase their dreams, regardless of age.