Three years ago around Halloween, I published a list of five psychological horror films that I considered some of the best in the genre (Do NOT Watch Alone…). These are films about the mind that will keep you awake at night.

The film I’m reviewing this time isn’t disturbing like the others. But it has wonderful atmosphere, and I can’t think of another film like it. Critic Leonard Maltin calls it a “near-brilliant mixture of humor and horror.” It is Roman Polanski’s 1967 satire The Fearless Vampire Killers, or Pardon Me, But Your Teeth Are in My Neck (known as Dance of the Vampires in Europe). *

No matter what you think of Roman Polanski’s sexual imbroglios, as with the great Woody Allen, it’s beyond dispute he’s one of cinema’s most talented writers-producers-directors. His 1965 British movie Repulsion is a tour-de-force of psychological horror (and made my aforesaid list). Two years after Repulsion, he made this more lighthearted film.

Since Tod Browning’s classic 1931 film Dracula starring Bela Lugosi, vampire films had become progressively stale. The bottom came with the asinine Billy the Kid Versus Dracula in 1966. (Don’t watch this unless you have a large supply of alcohol on hand…enough to drink yourself into stupefaction.) So it was about time someone knocked the stuffing out of the vampire genre.

(Has anyone yet knocked the stuffing out of ubiquitous vampire books??)

The movie plot is simple: in the mid-19th century, a scatterbrained German researcher named Professor Abronsius (Jack MacGowran) and his bewildered assistant Alfred (Polanski) travel through the snowy Transylvanian mountains to a small village in search of a vampire who supposedly lives nearby. While Abronsius is obsessed with tracking down and killing the bloodsucker, Alfred is more dazzled by the lasses in the local inn, including the lovely redheaded Sarah (Polanski’s future wife, Sharon Tate), whom he encounters while she’s soaping herself in a bubble bath.

The vampire, Count von Krolock (Ferdy Mayne), disrupts Alfred’s attempt at courtship when he kidnaps Sarah one night. Abronsius and Alfred then track him through the snow to his castle perched on the mountaintop. Bag of vampire-slaying tricks in hand, Abronsius is determined to destroy von Krolock, and Alfred is equally determined to rescue his damsel before she turns into a hollow-eyed blood bank. Without giving anything away, Abronsius and Alfred undergo various nail-biting (and neck-biting) escapades at the castle.

Expressive Irish actor MacGowran is perfect as Abronsius, with his faux pedagogy reminiscent of the standup comic “Professor” Irwin Corey (the “World’s Foremost Authority”). Instead of scientific jargon and Pyrex tubes, though, Abronsius speaks vampire clichés and wields garlic (“GAR-leek”), a wooden stake and mallet, and various crucifixes. Polanski makes a good shell-shocked stumblebum assistant. Tate, one of the most beautiful actresses in Hollywood at the time, doesn’t act much, or well, but she’s a visual delight. (Her horrific fate only two years later lends this film a tragic edge).

But the minor characters provide most of the funny moments. There’s the hunchback who serves as von Krolock’s personal “Igor,” with his gargantuan buck teeth and Beatle hairstyle. In an inspired move, Polanski gives von Krolock ’s creepy son Herbert (Iain Quarrier) a homosexual spin; Herbert is as sexually attracted to Alfred as he is thirsty for his blood. Best of all is actor Alfie Bass, who is Sarah’s father, and the innkeeper.  After turning vampire, he struggles to locate a comfortable place in the castle in which to situate his coffin. His exaggerated Yiddishness is hilarious.

The movie is filled with many moments of visual humor. The moonlit snowy landscape, courtesy of the Italian Alps, is another attractive feature. As is the shimmering music, particularly the psychedelic-Gothic score that accompanies the opening credits, created by the same person, European jazz musician Christopher Komeda, who later composed the score for Polanski’s universally acclaimed Rosemary’s Baby.

If you’re like me, you’ll get an adrenaline rush every time the doorbell rings on Halloween night. And if you’re really like me, after the doorbell stops ringing, you’ll plop yourself in your armchair and get a rush from a good horror flick. My suggestion this year is Roman Polanski’s The Fearless Vampire Killers.

And if you one day find yourself in Transylvania… beware of isolated mountain villages that have inns with “gar-leek” hanging over the front door!

(* Originally released in the U.K., The Fearless Vampire Killers was butchered by MGM when released in the U.S. Twelve minutes of the film were deleted, a cartoonish opening sequence was added, and MacGowran’s voice was given a deliberately comical and ill-suited dubbing. Polanski was understandably outraged, and campaigned to have the original version restored, which didn’t happen until the early 1980s.) 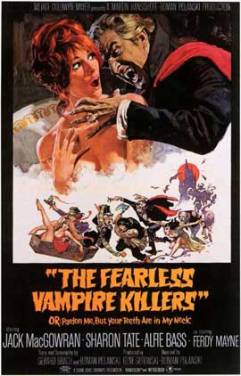