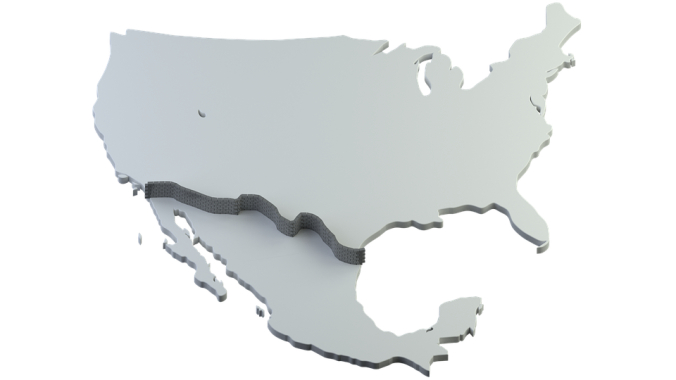 In 2015, I interviewed then-candidate Trump and touched on his wall policy. Now that Trump has (illogically) begun the second year of a presidential administration, I thought it might be worthwhile to visit with him for a status update on this wall. I’m curious to find out how big a priority the wall still is, and if the idea will lose air like so many other balloons the right-wing floats prior to every election (such as “locking up” Hillary Clinton for perceived “crimes”).

The United States of Amnesia deserves to be informed of how its elected officials are carrying out the duties for which they were elected. After all, “we” elected Trump, so “we” obviously deserve to know when and how this wall will be built. Has our government yet interviewed any landscape architects? Have we been privy to any blueprints? Will Mexico ever agree to finance construction? Will the wall extend all 2,000 miles of the border, or will Mother Nature assist in our exclusion effort? Will graffiti be permitted? If so, may we spray-paint obscenities at Trump, Mike Pence, and Paul Ryan without being tossed into Guantanamo?

Trump and I met on the back nine of one of his many golf courses. I was shocked at his appearance. The bags under his eyes were heavier, and his trademark scowl was even more hideous. Nonetheless, he proved to be an ingratiating host, kidding me about my frequent shanks and divots, and interrupting our interview only 22 times to tweet angry reprisals at his critics (who seemed to multiply as we neared the 19th hole).

I’ve tried to reconstruct the interview as best I can. However, it was difficult to record the conversation, since Trump and his favorite Secret Service agent (Special Agent Rocco Infante) sat in the golf cart, while I had to cling to the back, sharing space with the golf bags (Trump’s bag was a typically garish monstrosity and took up most of the area). Also, I think he was still mad at me for dissing his juvenile reality show in favor of PBS during our first interview.

longitudes: Thanks for meeting with me again, Mr. Trump.

Trump: My pleasure. I always enjoy mingling with the little people. Please call me “President” Trump.

longitudes: Speaking of which, how do you like your new job?

Trump: It’s not as easy as I thought! I have all these meetings and stuff. You’re also supposed to know stuff. Know what I mean? Covfefe.

Trump: Nothing. Hey, look at that hu-u-u-u-ge sand trap! C’mon, betcha ten grand that your ball lands in the dirt, Skippy.

longitudes: Please call me “greenpete.” I’m not a betting man, and those aren’t my kind of stakes. I’m not a golfer, either. But I’d like to ask you about your wall.

Trump: Uh… (Trump feverishly taps something into his favorite toy). Uh… what wall is that?

longitudes: The one along the Mexican border you promised to build if elected.

Trump: Oh. That wall. Uh… you didn’t think I was serious, did you? Such a thing would be impossible. Even with a Congress loaded with short-sighted, hypocritical Republicans, believe me.

longitudes: Yes, I tried to tell you that in our last interview.

longitudes: Your few meetings with Mexican President Peña Nieto haven’t gone well. Are you concerned that your supporters will get impatient that you honor your campaign promise?

Trump: My supporters? You mean those white nationalists and old ladies with dementia? They’d support me even if I defaced the Lincoln Memorial while wearing the American flag as a diaper. All they care about is that Hillary isn’t president, believe me.

longitudes: So you don’t think some will turn their backs on you in 2020?

Trump: That’s right. Anyway, any Democratic victory will be rigged. Fake news, baby. I’ll make sure I float that balloon, believe me. The Electoral College will come through for me again. Thank God for underpopulated red states like North Dakota.

longitudes: But even if the United States of Amnesia forgets about your promise to build the wall, aren’t you concerned about your…um… legacy?

longitudes: I believe history will show Obama as a great president.  What evidence do you have that he’s the “worst”?

Trump: I don’t need evidence. Rush Limbaugh and FOX News say he is. I’m the executive now, and my job is to slash taxes for people like me! I keep telling people, I DON’T NEED TO KNOW STUFF!

longitudes: Well, Mr. Trump, on that illuminating note, I’ll bring our interview to a close and hop off.

Trump: Hey, aren’t you going to join me on the 19th hole for, like, refreshments? Or supper with Mike Pence? (No chicks, of course… Mike’s a traditionally married man).

longitudes: I’ll pass. I have a WordPress deadline to meet. But before I leave, let me just say that, in our last interview, you called me a “loser.” You’ve also disparaged certain immigrants. On behalf of us losers and immigrants, and the many that you’ve insulted over the years, including, as president, Puerto Ricans and the family of the woman who was run over in Charlottesville, I just have three words: shame on you. Covfefe ?

But Trump doesn’t hear me. He’s stepped out of the presidential cart and is twirling his 9-iron while strolling toward the water hazard, where agent Infante just lifted from the muck, and repositioned, the bright orange golf ball emblazoned with his profile.

Only God, Allah, and agent Infante know how many more “mulligans” this man will be allowed.

(Disclaimer: this was a fantasy interview.  The only real interviews I’ve done are with people I like.)

12 thoughts on “The Trump Wall: A Progress Report”