Maggie Roche died last year. I only recently learned this sad news.  (Blame our relentless media avalanche, or my own hibernation inclinations). She and the music of The Roches have been continually rolling across my mind lately. If any artist deserves a profile on longitudes, Maggie Roche does.

For those who don’t know them, the Roches were an Irish-American trio of sisters, most popular in the late 1970s and ‘80s, famous for their intricate folk harmonies and quirky lyrics (and clothes). The Roches are treasured by a small cult of passionate, and distinctly older, fans. In other words, their music was far too clever and sophisticated to ever get past the left end of the FM dial.

I love all three sisters, who each contributed something special. But Maggie… the eldest and linchpin of the trio… was my favorite. Her songs were intriguing, with one foot in sunlight and the other in partial shadow. She had a touch of dusky Irish mystery, and I loved her strange alto/contralto vocals, aptly described by one writer as a young girl trying to imitate the voice of her father.

Here’s my paltry, belated tribute to this amazingly talented and very introverted artist. 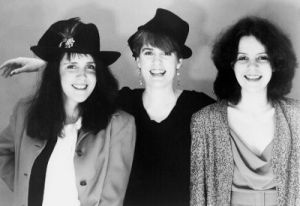 Margaret A. Roche was born October 26, 1951 in Detroit, Michigan, and raised in the leafy, conservative burg of Park Ridge, New Jersey to artistically inclined parents John (Jack) and Jude Roche. She first sang in Roman Catholic church choirs, sometimes with her two younger sisters, Terre (pronounced “Terry”) and Suzzy (rhymes with “fuzzy”). She started writing songs in 1964, after receiving a guitar for her birthday.

As they got older, the Roches supplemented their choir singing with annual Christmas caroling, sometimes venturing across the Hudson River to Greenwich Village. At their father’s prompting, they crisscrossed New Jersey to sing from the backs of trucks in support of Democratic candidates (their first large public appearance may have been in 1978, at a rally for Jersey Senator Bill Bradley, where they were introduced by comedian Chevy Chase).

Maggie briefly attended tiny Bard College in the Hudson Valley (I think it was just after Chase and Steely Dan’s Walter Becker and Donald Fagen), but she dropped out to form a duo with Terre. In 1972, after a songwriting class at NYU with Paul Simon, they assisted on one song on Simon’s album There Goes Rhymin’ Simon (1973). This led to an album with Columbia, Seductive Reasoning (1975). Few people know about this album, and even less bought it when released. But it contains early stirrings of genius by Maggie. Her closing song, “Jill of All Trades,” fits snugly alongside the best, then-in-vogue confessionals of singers like Laura Nyro, Carly Simon, and Judee Sill.

“All of you will buy a ticket, just to see my face again” (photo Irene Young)

Supposedly, Columbia hoped the duo would provide some sex appeal for its label. Instead, reflecting Maggie’s inclination toward modesty, Maggie and Terre deliberately dressed plain for the sleeve photo, with no makeup or jewelry.

Like the Everly Brothers, Bee Gees, and countless bluegrass bands, the Roches exploited their genes to create intuitive vocal harmonies, with Maggie anchoring the low end. They were also cheeky lyricists, penning ironic songs about adultery (“The Married Men,” written by Maggie), crowd anonymity (“The Train,” by Suzzy), and inter-generational tension (“Hammond Song,” by Maggie), among others.

All three stellar songs are featured on the Roches’ 1979 eponymous album on Warner Brothers, tastefully produced by, of all people, prog-rock god Robert Fripp (King Crimson), in “audio vérité” style.

( I still remember, as a record reviewer for my college newspaper, looking at the cover of The Roches album and thinking Why would three attractive women deliberately try to look nerdy and unsexy? And why is Fripp producing them? )

The Roches thrust the sisters into the spotlight. Critic Jay Cocks of Time magazine called their music “startling, lacerating, and amusing.” Linda Ronstadt and Phoebe Snow performed “The Married Men” together on Saturday Night Live, and soon after, Paul Simon chose them as his musical guests on the show. Punk rock was peaking in the late 1970s, and the Roches combined the directness of punk with literate and sardonic lyrics, precise pronunciation, avant-folk harmonies, and a goofy, insouciant attitude, to create something musically unique.

The follow-up album was punningly titled Nurds (1980), and was slightly disappointing compared to the debut… although Maggie’s “This Feminine Position” is one of their breeziest songs, with its soothing synthesizer and acoustic guitar. Also, she interprets an Irish folk ballad, “Factory Girl,” with aplomb.

The group came roaring back with Keep on Doing (1982), again produced by Fripp. This might be their high point, with Suzzy and Terre’s “Keep on Doing What You Do/Jerks on the Loose” and Maggie’s songs “Losing True” and “The Scorpion Lament.” “Losing True” is the song that permanently hooked me on the Roches. It’s rich with irony, rhyme, and alliteration, and the cathedral harmonizing, with syllables stretched to breaking point, rivals anything the Mamas and Papas ever did.

There were many TV appearances through the ‘80s, characterized by innocuous interview questions usually unrelated to the music. My favorite is Tom Snyder’s Tomorrow, from 1982, where poor, shy Maggie was dazzled by the cameras, and gripped the armchair like she wanted to bolt from the studio! In 1983, the Roches had an hour-long special on the PBS show Soundstage. In 1985, they appeared on both The Dick Cavett Show and The Tonight Show Starring Johnny Carson. Their music was then featured in the film Crossing Delancey (1988), starring Steven Spielberg’s then-wife, Amy Irving. Suzzy even had a small role in this film.

In 1990, Carson brought them back in the wake of their comeback album Speak. Here, they bopped to their beautifully sarcastic “Big Nuthin’,” written about their hyped but hollow TV spots (Carson naïvely thought the song was strictly about the Saturday Night Live appearance). By this point, Maggie was playing keyboards onstage.

While “Big Nuthin’” is the eye-opening track on Speak – a great album, song-wise, but hindered by then-fashionable high-tech production gloss – it’s the ghostly minimalism of Maggie’s title song that knocks me out.

Maggie, characteristically, kept a lower profile. She joined her sisters for music voice-overs (as roaches!) on a segment of Spielberg’s cartoon series Tiny Toon Adventures (her bug character was the brassiest of the three… a private joke for fans, since Maggie was so soft-spoken); a children’s record, Will You Be My Friend, which won a parents’ award; and made several records with Suzzy, including a 2001 collection of diverse prayers set to music, called Zero Church (for an inspiring, non-denominational, non-traditional song for Christmas, you can’t beat “Anyway” from that album). The Roches also covered songs for various artist tribute albums, notably a lush rendition of the Band’s “Acadian Driftwood.”

The last album with all three Roches was Moonswept in 2007. For me, the standout song is “Family of Bones.” Suzzy handed her sister the words, and Maggie waved her wand to conjure, in less than a day, the haunting, hymn-like music.

Maggie had breast cancer for ten years, but evidently didn’t tell her sisters until just before she died. Suzzy wrote on the Roches’ Facebook page that her sister was “a private person, too sensitive and shy for this world, but brimming with life, love, and talent.” She also called her a “brilliant songwriter” and “authentic.” Maggie left behind her partner, Michael McCarthy, and a son, country songwriter-producer-musician Felix McTeigue. In 1989, she wrote a song called “Broken Places” about a mother being reunited with her son, after giving him up for adoption. Most artists would attempt just a first-person narration of a risky song like this. Maggie, however, interpreted it (like “Hammond Song”) from two different viewpoints.

While I don’t usually provide links to songs, I can’t help but do it here. In addition to a self-effacing sense of fashion, Maggie had a wicked sense of humor. The song below is from the seriously underrated album Can We Go Home Now (1995): thirty-three couplets of Maggie’s hilarious rhyming bliss, sung from the protective shell of her allegorical black winter coat.

Fly with the angels, dusky songbird.

(Thanks to John Lingan, The New York Times Magazine, for some information)