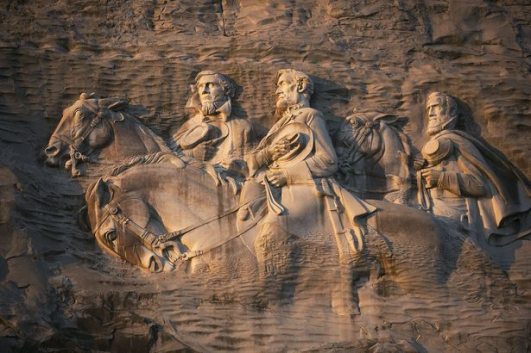 It’s not often that longitudes is stumped. On issues like guns, environment, domestic terrorism, fascism, political electionism etc., this blog has no trouble clearly expressing where it stands.

But longitudes has struggled to make sense of the polarized reactions to chunks of Confederate stone being carted away recently.

Usually, there are one or two soundbites that, like little marshmallows in hot cocoa, always bob to the surface. In the case of monument removals, that soundbite is the word “history.”

“But it’s history!” some say (including my wife).  “You can’t change history!” is also heard.  But are monuments to history history?  And how is history actually being changed?

As loyal readers know, longitudes loves history. An understanding of history is good, because it often prevents us from repeating past mistakes. Frequently, longitudes appears dismayed at the indifference of many Americans to their own history. So it’s perplexing to hear so many Americans now, suddenly, expressing concern for American history. This applies to statue removers as well as statue defenders. Why this sudden obsession with history???

Alright, I’ll cut out the cuteness. This is a serious issue. But not because historical remembrance is threatened. It’s not. It’s serious because, like most everything else in America today and 152 years ago – including the hue and cry over the Confederate flag two years ago, on the heels of the murders of nine black church parishioners in Charleston, South Carolina by a white supremacist – the subject is race. And people are once again being killed over it. 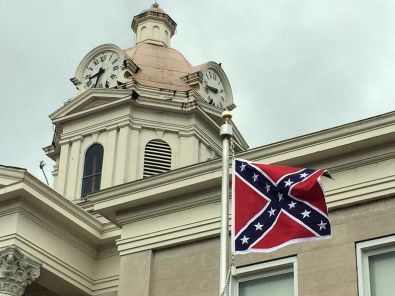 Now that the statue hue and cry is gradually subsiding, and the U.S. media is being diverted by other dishes at the buffet table, I’ll take my turn and weigh in on monument removals (side note: like food dishes, news stories in the U.S. have a limited lifespan. Politicians learned this a long time ago, and they merely wait until the food gets stale: perhaps one reason why the incompetent blowhard in the White House hasn’t yet been impeached).

Every issue requires historical context. Many of those who now claim to be concerned about history, however, don’t provide it. Since longitudes does value historical understanding, here’s some quick context:

Based on the last paragraph, one might guess that longitudes supports the removal of monuments to people with white skin who fought to maintain bondage of people with black skin. Actually, longitudes agrees with Civil War historian David Blight. He argues that Confederate monument removal is a healthy thing for America, but it should be conducted in a thoughtful, intelligent manner, and not hastily and indiscriminately, with grandstanding and finger-pointing.

For example, there’s a palpable difference between an obelisk at Yellow Tavern, Virginia denoting where Confederate General J.E.B. Stuart was killed, and the obelisk in Andersonville, Georgia that memorializes Henry Wirz, commander of infamous Andersonville prison, who was hung for war crimes. Likewise, there’s a difference between the giant stone engraving in Atlanta of General Lee astride his warhorse, Traveller, flanked by Jackson and Confederate President Jefferson Davis, all with their hats pressed to their hearts in devotion to The Cause, and a statue of civilian Robert E. Lee at his home in Arlington, Virginia, gazing ruefully across the Potomac toward Washington… a statue which currently doesn’t exist.

Years ago, while visiting a Civil War museum with my father down South, I read a letter Lee had written to his son. I was taken aback by his words, which seemed to me to be mature, reasoned, and enlightened. Unfortunately, Lee was also shaped by his unenlightened time and place. He owned slaves, he ordered them whipped, and he led the fight in a cause to preserve slavery. He wasn’t a god, despite what many neo-Confederates would like to believe. He had feet of clay like the rest of us.

So did slaveholders George Washington and Thomas Jefferson, both honored by monuments in the nation’s capital.

But longitudes also feels that too many white Americans are unwilling to walk in the shoes of non-white Americans. By virtue of their birth, they don’t have to. So they don’t make the effort to even speculate. Perhaps if these privileged white Americans envisioned themselves as being black, and living in Richmond or Charleston, and, on their daily commute, having to pass a memorial to a cause that was committed to keeping their ancestors in shackles… they might see things a bit differently regarding removal of certain flags and monuments.

Removing these memorials doesn’t remove or re-write history, despite what monument defenders claim. The history can’t be erased. The removals merely erase symbols that are painful to certain people, and a gruesome cause célèbre to others. If folks want to remember Confederate history, they don’t need a statue or flag to do so. They can go to the library and read a book.

And in the process they might learn some American history. 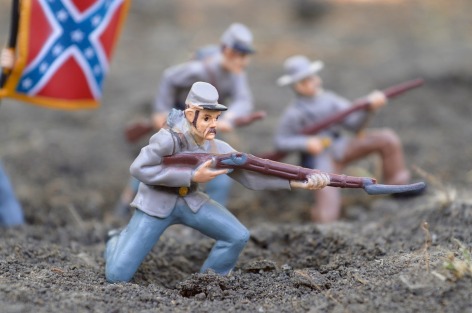