Forget about your cares

It is time to relax

My most frequent babysitter as a kid was the television set.  Now, I realize I’m a little strange, but I don’t think that’s unusual for baby boomers.  I probably saw most episodes of the more popular cartoons, Westerns, and sitcoms made during the 1960s. Back then, though, I didn’t know which shows were good and which were bad. I just watched what the networks fed me. I hadn’t yet developed any critical thinking skills.

Today, thanks to various cable TV stations that specialize in nostalgia, I get to indulge in many of these shows again. And I sometimes wonder “Why did I ever watch this dopey thing?”

One of them is the half-hour CBS show, Petticoat Junction. This is a situation comedy with a rural theme that aired between 1963 and 1970. Petticoat Junction had two sister shows, “The Beverly Hillbillies” and “Green Acres.” These two shows were funny. Petticoat Junction was… well… “charming.” But there were few truly wacko characters, so the show relied more on light situations, and the laughs were sparse.

So why am I praising it? Maybe because I’m now popping Centrum® senior multivitamins, but I don’t require laughs like I once did. Just smiles. These days, old-fashioned settings and cornball humor, which Petticoat Junction had in spades, are (pardon the colloquialism)… fine and dandy.

Granny and Jethro Clampett are TV classics, and I love the crazed bumpkins in “Green Acres,” who lived in a strange, alternative universe. But Petticoat Junction, for me, is less frenzied.

Heavens to Betsy, I don’t want frenzy these days! What do I want? I’ll tell you: I want to recline in a rocking chair on the front porch of the Shady Rest Hotel, ogle the beautiful Bradley sisters, then mosey inside with Uncle Joe to sample Kate Bradley’s fried chicken, mashed potatoes, and gravy.

Petticoat Junction (henceforth “PJ”) was one of three situation comedies (including the earlier “The Beverly Hillbillies” and the later “Green Acres”) created by a man named Paul Henning. Henning was a prolific writer of radio, television, and film. In 1962, he concocted an idea for a television show about a bunch of hillbillies who strike it rich, then move to swanky Beverly Hills, California. “The Beverly Hillbillies” was so successful, Henning was asked to invent another show. This would be PJ.

Henning came up with the show’s premise from stories his wife told of being a child in Eldon, Missouri, where her grandparents ran a hotel near some railroad tracks. She entertained Henning with anecdotes about the simple local folk, and the city slickers who checked into the hotel. Henning liked the contrast, which was sort of a reversal of “The Beverly Hillbillies.”

He called his fictional hotel the “Shady Rest,” situating it midway between the farm towns of Hooterville and Pixley. A three-car passenger train named the “Hooterville Cannonball” connected the two boroughs, but apparently went nowhere else (if you like trains, the “Cannonball” might be worthy of research). The town of Hooterville had a small grocery store run by a man named Sam Drucker (Frank Cady). Nearby lived various farmers, such as Fred, Doris, and Arnold Ziffle (the last-named a near-genius pig), Newt Kiley, catty Selma Plout, deaf Grandpappy Miller, ex-New Yorkers Oliver Wendell and Lisa Douglas, and others. But most of the action occurred in and around the Shady Rest Hotel.

Here, a widow named Kate Bradley (Bea Benaderet) managed the Shady Rest, along with her three luscious daughters: Billie Jo, Bobbie Jo, and Betty Jo. They were assisted… or unassisted… by Kate’s uncle, Joe Carson (Edgar Buchanan). There was also a frisky terrier with no name who was always upstaging Uncle Joe whenever Joe tried to concoct some new, failed business enterprise.

Edgar Buchanan, as Uncle Joe, was the only other principal actor besides Henning and Frank Cady to last the entire run. He was the closest thing to a wacko and provided many of the best laughs. He just wasn’t as good-looking as his nieces.

Along with its instantly recognizable theme song, music played a big part in PJ, both inside and outside the show. Actress Pat Woodell was a professional singer, and Meredith MacRae was the daughter of singer/actors Sheila (“The Honeymooners”) and Gordon MacRae (OKLAHOMA). During the 1963-64 season, the three Bradley girls and a friend (played by Sheila James from “Dobie Gillis”) formed a mop-top pop group called The Ladybugs, in response to the Beatles’ recent success (the actresses recorded a single as The Ladybugs and, like the Beatles, appeared on “The Ed Sullivan Show”). In 1968-69, MacRae, Saunders, and Henning released two singles as The Girls from Petticoat Junction. And many episodes, particularly the later ones, featured group singalongs around the piano.

Of the seven seasons that PJ aired, my favorites are seasons four and five. These featured Meredith MacRae, who played Billie Jo the longest.  Also, the fictional sisters’ personas had solidified: Billie Jo was ambitious and career-minded; Bobbie Jo was a cute airhead; and Betty Jo was the tomboy turned wife and mother.

Also, seasons four and five still featured Bea Benaderet as the mom, Kate Bradley. Benaderet was the most skilled actor in PJ. She’d had a long career in radio and television (she provided the voice for Betty Rubble in “The Flintstones”). She was so talented, that Paul Henning is on record saying that PJ existed only because he wanted to get Benaderet in a starring role.

Sadly, Benaderet contracted lung cancer, and she missed much of season five. She died in 1968. Her place was taken by June Lockhart, who portrayed a doctor who takes up residence at the Shady Rest. Lockhart tried, but she couldn’t replace Benaderet. The show’s ratings declined.

PJ was canceled in 1970 at the beginning of an infamous “rural purge” by CBS. A lot had happened in America in the late 1960s, and CBS executives felt that comedies with rural themes were out of touch. Pat Buttram, who played Mr. Haney on “Green Acres,” famously said “(they) canceled everything with a tree.” Shows like PJ, “Green Acres,” and “Mayberry R.F.D.” were replaced by more urbane and topical sitcoms like “All in the Family,” “M.A.S.H.,” and “The Mary Tyler Moore Show.”

Those shows, and others from the 1970s, are comedic wonders, loaded with clever writing, characters, and trend-setting humor. But it’s a heterogenous world, and I feel there’s also a place for simpler, throwback shows like PJ. I’m grateful to MeTV for resurrecting this special show, which for some reason has been neglected by the suits at other cable stations.

If you like homespun simplicity, check out PJ, if not on MeTV, then on DVD. It won’t have you howling with laughter. But it has a simple grace that is especially welcomed in these graceless times. 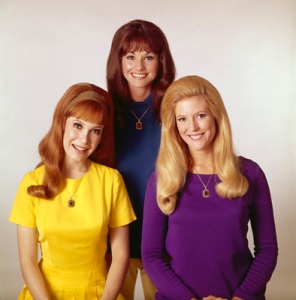 Some interesting facts about PJ:

(Wikipedia provided much of the information for this article. If you want to read an exhaustive analysis of the fictional town of Hooterville, click here. Someone devoted a lot of time to this subject. This person sounds even stranger than me.)

16 thoughts on “Come Ride the Little Train: In Praise of “Petticoat Junction””