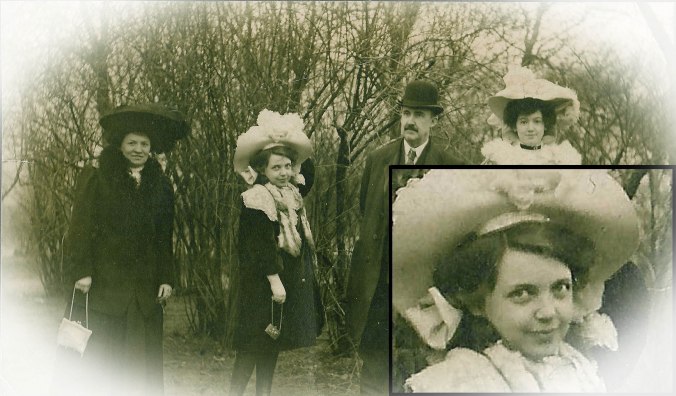 I saw her only once.

It was Thanksgiving Day, 1970. At my aunt’s house in New Jersey. After dinner, Bown showed one of his silent movies. She sat like a tiny sparrow on the sofa. But there was a large elephant in the room. Why was everyone acting so strange?

I didn’t see her the first 12 years of my life, and never again the last 10 years of hers.

When I was very young, I used to ask my parents about her. “Why don’t we ever visit Grandma?” And they always told me that she was “in the hospital.” It wasn’t until my teen years, when I was in my dad’s study and accidentally-on-purpose read an opened letter that she’d written to him, that I finally understood why she was always “in the hospital.”

My grandmother was born in 1895 in an upscale section of Harlem. Her mother was descended from one of the first families of New York, and her father from early Massachusetts Puritans. She must have begun piano studies at an early age, because she eventually became so talented, she was invited to tour with composer Victor Herbert. But it never happened.

In 1918 she married my grandpa. A more unlikely pairing you couldn’t imagine. He was from central Pennsylvania farm stock and 15 years older. He was a practical New York businessman, she a musical romantic. According to my aunt, he’d had a date with her older sister, Blanche, at Delmonico’s. Afterwards, Blanche invited him to her Harlem brownstone to meet the family. He took one look at the younger sister and was besotted. Poor Blanche.

She gave birth to my dad in 1922, and my aunt two years later. Maybe raising two children was too much for her. She probably had something that she’d inherited. Could it have been from her grandfather, the Civil War naval captain who was court-martialed? No one knows.

In 1930, she entered the hospital for six months, but was released. A year later she entered for good. Permanent vacation. Imposed communal living for the next 50 years. Jeezus. That’s a lot of piano-playing in the day room.

My dad never talked about her. She wasn’t at his wedding. Early in his marriage to Mom, he told her “I never had a mother.” But here’s a quirky upside: her absence brought him very close to his father. “Dad could have left her, and nobody would have faulted him.” My dad adopted his dad’s strength of character.

I remember a few things from that Thanksgiving Day. I had a Craig reel-to-reel tape recorder, and I taped conversations in the kitchen while the turkey roasted. Goofing off with my cousin and brothers. Dallas playing Green Bay. George Harrison’s “My Sweet Lord” all over the radio.

And there are one or two photos of the meal. Bown, married to Aunt Blanche’s daughter, wearing a pin-striped suit, sitting erect with his hands folded on the table, a benign smile on his face. Grandma is at the head of the table, with her hands up to her face, her mouth open, as if surprised, tired, or confused. Her hair is gray and frizzy. She looks small and insignificant. And I remember the other adults, including my noble dad, treating her gently but awkwardly, as if she might break any moment.

Then came the movie. I remember the dark, claustrophobic living room with the thick, Persian rug, and the musty but pleasant smell of old things. A step into antiquity. The movie was The Thief of Bagdad, starring dashing Douglas Fairbanks. It was released in 1924, six years before Grandma went into exile.

I remember Bown acting as master of ceremonies and working his bulky black movie projector. He gave a florid introduction, then intermittent narration. Mainly, I remember his politeness to Grandma. “What do you think of the motion picture, Grandmother?” he must have asked her three or four times. And Grandma – her eyes blinking in the glow from the movie screen, with God knows what fantastic thoughts and images ricocheting through her broken brain – gave the same response every time:

6 thoughts on “Elegance in a Shuttered Room”