A year ago today I wrote about the year 1966 in popular music. 1966 was a watershed. Greying, traditional singers and song interpreters were being pushed down the record charts by young rebels sporting Beatle haircuts, paisley shirts, and leather boots, many of whom wrote their own songs. Blues, soul, surf, and folk music were colliding head-on with ringing guitars, creamy vocal harmonies, and an infectious rock backbeat. This musical amalgam was both fresh and exciting. But… just under the surface of this “jangle pop,” unknown forces were bubbling.

The leading lights in rock music – the Beatles, Bob Dylan, and the Rolling Stones – had sampled hallucinogenic drugs by 1967. In addition to being curious about mind expansion via chemical transport, they also wanted to explore the architecture and limitless tapestry of sound, language, and ideas. Instead of merely an affirmative “Yeah, yeah, yeah,” a lot of probing questions were being raised. Minds were floating downstream, and mothers were now standing in the shadows.

1966 was also the year the Beatles stopped touring to concentrate on recording, and the year of John Lennon’s incendiary (at least, in America) comment “I don’t know which will go first, rock ‘n’ roll or Christianity.”

January 1967 was ripe for revolutionary music like that of the Doors.

I was 9 when I first heard the Doors’ single “Light My Fire” on AM radio. Although a truncated, radio-friendly version of the album cut, this song’s hypnotic rhythms, exotic instrumentation, and potent vocals temporarily pushed the Beatles and Monkees out of my head (and it’s still my favorite song). But not until college, when I scraped some dollars together for the first eponymous Doors album, was I really able to grasp this band’s awesome power.

The Doors were maybe the world’s first “existential” band. They somehow were able to marry rock and blues music with Nietzsche, Blake, Freud, and Eastern mysticism, yet still managed to have hits and make teenage girls swoon… as well as older women. My mother heard me playing that first album one day during summer break:

“Peter, who is that singer?” she yelled down to the basement.

“I love his singing! I haven’t heard a voice like that since Frank Sinatra!”

Before long she was joining me in the basement to gaze at the rock god pictured on my album sleeve, as well as listen to the songs – which include the climactic finale “The End.” If you’re familiar with the lyrics to “The End,” you’ll understand how awkward an experience this was for me.

Anyway, I could rattle on and on about the Doors and that first explosive album, a true classic, unleashed to the world on January 4, 1967. But others have reviewed it much better, and I only have so much space here. So here’s merely a quick song-by-song summation:

Break on Through (To the Other Side): the first single, and maybe the definitive Doors song. Beastly, guttural, and relentless, I’ve always thought of it as an aural interpretation of sexual intercourse. But that’s just me.

Soul Kitchen: sneering and funky, and a perfect follow-up to the opener. Something strange is being cooked up in this kitchen. Not sure what it is, but it’s pulling me inside.

The Crystal Ship: a gorgeous song. Drummer John Densmore has said it’s about Morrison’s breakup with a girlfriend, but there are many other interpretations.

Twentieth Century Fox: this song ties in Morrison’s and organist Ray Manzarek’s film studies at UCLA. But I don’t think Morrison is singing about Shirley Temple.

Alabama Song (Whisky Bar): written by Bertolt Brecht and Kurt Weill, from their satirical opera “Rise and Fall of the City of Mahagonny,” it’s the song that convinced Elektra founder Jac Holzman to sign the Doors, after seeing them perform it at the Whisky a Go Go in L.A. One of the strangest covers ever chosen for a rock LP, it nonetheless shows how eclectic the band was.

Light My Fire: written by guitarist Robbie Krieger, the short version of the Doors’ second single climbed to No. 1 in July 1967, and the band never looked back. The album version, with both a keyboard and guitar solo, is far more riveting. José Feliciano later had a No. 3 hit with a Latin-tinged acoustic rendition.

Back Door Man: a lot of old blues songs were covered in the ‘60s, most not very well. One notable exception is Cream’s version of Robert Johnson‘s “Cross Road Blues.” Another is this Willie Dixon song, which the Doors made into their own. Morrison was still in the soul kitchen, only now he was sampling long-legged chicken.

I Looked at You/End of the Night/Take it As It Comes: I lumped these three songs together because they’re similar in tone and structure and seem to comprise three sections of one song, and they also provide a slow glide into the final song. Dark and sinister, the key song/line for me is “Some are born to sweet delight/Some are born to the endless night.” The universe can be a hostile and indifferent place.

Suddenly, we arrive at…

The End: I didn’t know what to make of this 12-minute epic when I first heard it. It’s less a song than a series of short poems set to psychedelic raga. Morrison sounds like he’s intoning a dark sermon, taking the voyeuristic listener on a weird journey into goldmines, riding on snakes and blue buses. The section about the killer walking down the hall is chilling (Truman Capote‘s seminal non-fiction novel “In Cold Blood” was published just before the song was recorded).

Unbelievably, “The End” was recorded in only two takes. According to Holzman, the second half of Take 2 was so intense that, as the closing notes faded, producer Paul Rothchild turned to him in the booth, and with a stunned look said “Jac, this is why we do what we do.”

(Thanks for letting me share one of my favorite albums… stay tuned, because in March I’ll be recognizing the 50-year anniversary of another classic debut: “The Velvet Underground and Nico”). 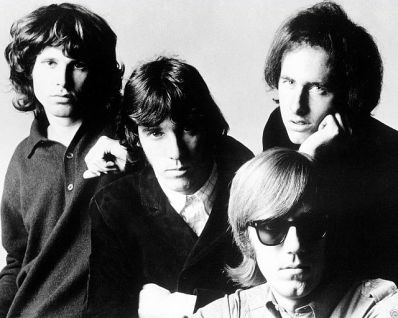