To the islanders, he was a nobody. To me, the most impressive man, tho’ wholly unassuming, even humble – that I ever encountered.

(Author Herman Melville, writing about meeting Essex whaleship captain George Pollard, who ended his days as a night watchman on the island of Nantucket)

As a teenager, I attended a boys’ boarding school for three years. It was a unique experience, as if 19th-century England had been transplanted to western Pennsylvania, and I could probably fill a book with all the craziness that went down there. But since I only have a small space here, I’ll share just one memorable episode that occurred my junior year.

Like every school, there were a bunch of auxiliary personnel that made the place function: maintenance, administration, food service, etc. For example, during my sophomore year in Clark Hall, there was a maintenance man named “Putt.” He was Native-American, and all the students loved him. I think he got his name because he was always “puttering around.” I remember he had an ongoing feud with the dorm master of Clark, Mr. Stokes. Putt called him “Stoke.” We never found out what the feud was about, but you couldn’t talk with Putt without him eventually bringing up “That damn Stoke.”

There were also the fieldhouse towel guys, Lyle and Howard. I’m sure they had other duties, but it seemed like their only role was to hand out clean athletic towels. Howard must’ve been in his 60s. He had a real soft voice, and he was one of these folks who can’t let go of a conversation. He’d go on and on, and you had to literally start walking away saying “Well, Howard, it’s been nice talking to you.” And he’d still be droning on when you were ten feet away.

But there was one person at that school that I don’t think anybody knew about other than me: the night watchman.

During my junior year, I had a bout of insomnia (it may have had to do with chemistry class). I remember lying awake one night, staring at the wood-paneled wall at 3 a.m., and hearing the downstairs door close. Then listening to footsteps on the stairs, and along the creaky hallway outside my door. Then up the opposite stairs to the third floor, then down, then out the door.

As far as I knew, everybody else was asleep. And this mysterious, nocturnal interloper somehow riveted me. Who the heck was he?

On the following night, at 3 a.m. precisely, I again heard the sounds. This time, I got up, opened the door a crack, peeked into the dimly lit hallway, and waited. As the steps became louder, I saw a yellow glow bouncing around the hallway walls, and heard a jangling sound. Eventually, strolling slowly down the middle of the hall, a man came into view. He looked like an oversized troll. He was short, bowlegged, mustached, and he wore a gigantic ring of keys on his waist and carried a monstrous flashlight. He looked somewhat like that Super Mario cartoon character, except he also wore glasses with really thick lenses.

I pulled my head back so he wouldn’t see me. Then I listened to the fading steps, and the door shutting as he left the dorm. I eventually fell asleep. But the following day, I saw the headmaster’s son and asked him about this strange apparition:

“He lives on the edge of the golf course. But nobody ever sees him. The school cuts him a paycheck every few weeks, and he picks it up on his nightly rounds.”

This fascinated me. Particularly when I realized there were no houses on the edge of the golf course. It was nothing but woods.

Later that day – instead of studying chemistry – I headed over to the golf course. I walked all along the line where the fairway hugged the woods. No houses… nothing. Then I saw a pathway that I’d never noticed before. It headed into the shadowy woods. Curious, I followed it.

After about a quarter-mile or so, I came to a building. I can’t really call it a “house.” It looked like it was made of cinder blocks, with a flat roof, and it had dark green moss and vines growing all over it. All the windows had closed drapes. No sign of life, and no sounds, other than a few birds chirping. Feeling a little creeped out, alone in the woods near this spooky building, I left.

Wow. This guy was Boo Radley and Bilbo Baggins rolled into one! As is typical with me, my mind started doing cartwheels. “Maybe I should visit him some time, as he’s probably really lonely.” Then a couple seconds later, “Better not, he could be a serial killer. I don’t wanna end up buried under his vegetable garden.” Those kind of thoughts.

I decided to compromise. So, during my next night of insomnia, I left him an unsolicited token. After everyone else was asleep, I placed a Three Musketeers candy bar on the edge of the hallway (I figured a white wrapper would help my new friend notice it better). Then I waited.

At 3 a.m. sharp, I heard the door, the steps, then saw the flashlight beam. Then he came into view. As I peeked through the door crack, I watched in anticipation as he approached the candy bar. When his flashlight beam landed on the bar, he stopped. Probably for a full ten seconds. Although I’m no mind reader, I can guess what he was thinking:

“Should I pick it up? No, I’m a night watchman, not a trash collector. But it sure looks tasty! No, I’d better move on.” And he kept walking, as I pulled my head back from the door.

I was crestfallen. How could he not accept my gift?? It never occurred to me to step into the hallway and offer him the treat.

The foolishness of youth.

Well, it was the last time I did something like that, because later on during that sleepless night, I had a terrifying, and typically insomniac thought: what if he discovers I’m playing games like this and reports me to the headmaster? I couldn’t bear the idea of a confrontation:

“Peter, we’ve had some reports about you.”

Not long after that night, my insomnia faded. And for the rest of my time in that school, I never heard nor saw my hermit friend again.

Like so many other things (such as chucking apples at cars… see previous post), I have regrets. Instead of playing games with candy bars, I should’ve just stepped into the hallway and introduced myself:

“Hi, my name’s Pete. I know you probably don’t get a lot of recognition, but we students really appreciate the work you’re doing, keeping us safe and all.”

And it’s quite possible he wasn’t the lonely hermit my imagination made him out to be. He may have led a very rich life, with family, friends, places he visited, and hobbies he enjoyed. Maybe it was just me who was lonely. 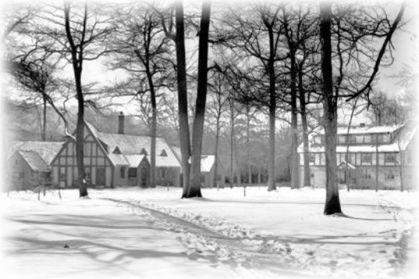 14 thoughts on “The Night Watchman”