A man lies in a wooden bathtub filled with soap suds. His face is dotted with beard stubble and beads of sweat. There are pockmarks punched into his left cheek and a bloody gash above his right eyebrow. A leather, string necklace dangles from his neck. He licks his dirty finger then digs inside his ear.

Suddenly, the wooden, saloon-style doors swing open and a one-armed man brandishing a six-shooter bursts into the room.

“I been lookin’ for you for eight months,” he croaks. “Whenever I SHOULDA had a gun in my RIGHT hand, I thought of you. Now I find you exactly in the position that suits me. I had lotsa time to learn how to shoot with my LEFT.”

There’s the sound of a click, then four bursts of gunfire, as suds spray from the tub. The one-armed man spins back through the door, topples over a table, and lands on a broken bed. He groans and struggles to get upright. The bathtub guy rests his gun barrel on the swinging door, and fires one final shot.

In a gruff Mexican accent, he says “When you have to shoot, SHOOT. Don’t talk.”

The entire scene lasts almost two minutes. But only twenty seconds is dialog.

If you are a fan of Clint Eastwood, you probably know this scene. It is one of many memorable moments from the Sergio Leone-directed “Spaghetti Western” entitled “The Good, the Bad, and the Ugly.” Although Eastwood is the star, Eli Wallach (the Mexican in the bathtub, named “Tuco”) and bad guy Lee Van Cleef help make this film one of the great “revisionist” Westerns. Even if you’ve never seen it, you’re surely familiar with the title and the music, which are now embedded in popular culture. 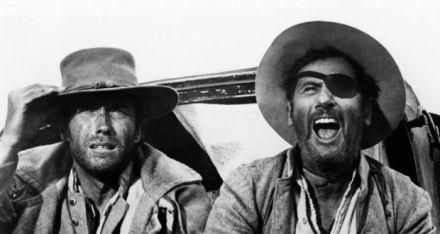 It is Oscar time again, and, surprisingly, two movies nominated this year for awards are Westerns (The Revenant and The Hateful Eight). This gives me an opportunity to talk about some of my favorite Westerns, with “The Good, the Bad, and the Ugly” at the top of the list.

One hears the term “revisionist” much these days, and it is usually in negative way. Revisionist history often implies embellishing or altering historical fact to suit a particular agenda. But Revisionist Westerns were intended to bring more realism to a film genre, and, in my opinion, they improved the genre. Nothing against John Ford, John Wayne, or Gary Cooper, who made some of the most noteworthy Westerns in Tinseltown. But I prefer cowboys who have a little tobacco juice on their whiskers – if you know what I mean.

Before the 1960s and dating back to the silent film era of the 1920s, movie Westerns and later television Westerns were extraordinarily popular, but very formulaic. With only a few exceptions, there were good guys and bad guys, and little in-between. The actors looked like they had just stepped from the fitting room at JCPenney. The dialog was clean and predictable. Even the violence was clean, with maybe a spot of grey, at most, to reveal blood. If a good guy was shot, he always managed to take a few moments to gasp some poignant last words.

Women were limited to secondary roles as wives or sweethearts. American Indians were always portrayed by white actors, and always the evil aggressor. If Mexicans were depicted at all, they were generally lazy and subservient (a notable exception being in the Marlon Brando vehicle, Viva Zapata). 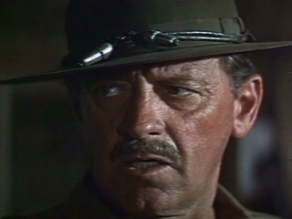 William Holden in “The Wild Bunch”

But in the 1960s and early ‘70s, America went through many changes, and these changes affected how movies were made, including Westerns. Realism began to displace romanticism, and Westerns became more cynical and critical of the motives and actions of frontier lawmen, settlers, Christian missionaries, government agents, and the U.S. Army. Westerns reflected the times in which they were made.

In addition to theme and tone, style changed as well. European directors like Leone had much to do with this. I already devoted a whole blog post to Spaghetti Westerns (Spaghetti Western Feast), so I won’t reiterate here. But these foreign-made Revisionist Westerns greatly influenced Hollywood. They emphasized realistic cinematography, action and atmosphere over dialog, authentic costuming and makeup, and, for good or bad (or ugly)… a much harder edge to the violence.

I’ve once again blathered on far too long. Let’s get to the good stuff. As promised, here are my top ten favorite Westerns. All of them can be considered Revisionist Westerns. (One favorite NOT in this list is HUD, starring Paul Newman, and based on the book Horseman, Pass By by Larry McMurtry. Although revisionist in nature, the setting is the contemporary West.  I feel this brilliant flick deserves a separate category.)

10. THEY CALL ME TRINITY (1970): An unusual Spaghetti Western that spoofs the genre, it is the first in a series of “Trinity” movies starring blond, blue-eyed Terence Hill.

He plays a lazy, happy-go-lucky cowboy who teams with his brooding brother to protect a town of pacifist Mormons from a ruthless land baron. Lighthearted fare with lots of funny moments (including hilarious overdubs).

I haven’t seen it in years, but I remember it as a minor gem with lots of atmosphere. A highlight is a great arm wrestling scene with live scorpions on the table. Unrelated to Appaloosa (2008) with Ed Harris.

8. WILL PENNY (1968): Charlton Heston called this his favorite film. He plays a loner cowboy whose mountain cabin has been “borrowed” by a young widow and her son. Beautiful scenery, with excellent supporting cast, especially bad guys Donald Pleasance and Bruce Dern. A little old-fashioned, but revisionist due to an unusual ending. 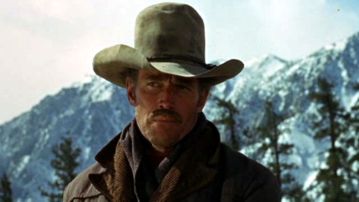 7. THE WILD BUNCH (1969): This might be director Sam Peckinpah’s greatest film. 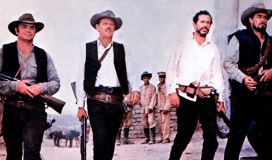 It stars William Holden, Robert Ryan, Ernest Borgnine, and other great actors too numerous to list. The Old West is changing, and a team of aging outlaws go south of the border after one last heist. Raw, bawdy, THE WILD BUNCH makes John Ford Westerns look like chick flicks. “Let’s go!”

Another Brando flick, this was his only directorial attempt and is maybe the first Revisionist Western. He plays Rio, a robber who is double-crossed by his older partner, Dad Longworth (Karl Malden), and who years later tracks him down. His plans to kill Dad are complicated when he falls in love with Dad’s virginal daughter. Rio is nasty, but the audience sympathizes with his plight. Malden, who had appeared with Brando in both On the Waterfront and A Streetcar Named Desire, called him “a genius in our time” after this film.

5. ONCE UPON A TIME IN THE WEST (1968): This is an epic Spaghetti Western by Sergio Leone and stars Henry Fonda, Jason Robards, and Charles Bronson. Like THE WILD BUNCH, it concerns the encroachment of civilization (the railroad) on the Old West.

Fonda is chilling as the villain, Bronson is moody and mysterious, and Robards adds class. Claudia Cardinale plays a struggling widow, but she’s also sexy and independent. Her “rape” by Fonda is very unsettling.

4. HOMBRE (1967): Based on an early Elmore Leonard novel about a white man raised by Apaches, Paul Newman portrays the stoic and taciturn John Russell, who, reluctantly, has to protect a group of bigoted whites from a band of outlaws. One of the bigots is a corrupt Apache Indian agent (excellently played by the great Fredric March). After 40 years of vanilla Westerns, here’s one that honestly depicts racism against Indians.

3. JEREMIAH JOHNSON (1972): Beautifully shot in the mountains of Utah, with some of the most breathtaking cinematography of any Western. Robert Redford plays an alienated Mexican War veteran who disappears into the Rocky Mountains to become a trapper.

He meets an eccentric grizzly hunter, is forced into leading a group of pioneers through hostile Crow country, and soon has to defend himself from isolated attacks by Crow warriors. Atmospheric, with sparse dialog, it is (literally) great escapism.

This movie is perfect on every level. It is tragic, funny, dramatic, has great acting (Chief Dan George was nominated for an Oscar), and it depicts Plains Indian cultural and spiritual life with sensitivity, humor, and truth. Richard Mulligan makes a more enjoyable Gen. George A. Custer than Custer himself. See this movie at least once before you die!

Sergio Leone, Clint Eastwood, Eli Wallach, Lee Van Cleef, soundtrack composer Ennio Morricone, and the stark Andalusia landscape. What this movie lacks in substance it makes up in style. What else can I say?  Only that I’ve seen this movie well over a dozen times and I keep going back for more.

Whew! I apologize for not heeding Tuco’s advice, and talking too long. I guess my only excuse is that I love movies, particularly Westerns, and I also love lists. And I’d love to see your own lists, so please tell me your own favorites (revisionist or otherwise).

Until then, I wish you happy trails and beautiful sunsets!

The Word on Long-Distance Backpacking and More.