His official name is OR-7. No, he’s not a robot from the latest installment of “Star Wars.” But he is a star.

OR-7 is the first gray wolf to be sighted in California since 1924 (when the last wolf in that state was shot). He crossed the border from southern Oregon on December 28, 2011, having traveled over 1,000 miles from a small pack in northeastern Oregon.

Since then he’s returned to the Cascades of southwestern Oregon and mated with a black female, who has given birth to at least three pups (this family is now referred to as the “Rogue Pack”). And just a few days ago, another wandering wolf was photographed by a trail camera west of Keno, Oregon (GPS tracking showed that OR-7 was far away at the time).

Not long after OR-7 was sighted, a conservation group, Oregon Wild, held an art contest challenging children to come up with a more interesting name for the wolf (OR-7 was used by biologists because he was the seventh wolf radio-collared in the state of Oregon). The winning name was “Journey.” Fans of Journey track his wandering activity, and a documentary was recently made of him.  His fan club hopes that this celebrity will engender awareness of wolf conservation, and they refer to him as “the wolf too famous to kill.” 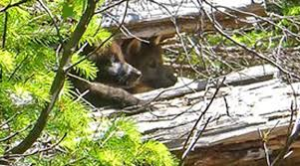 I can’t think of a reason why anyone would want to kill a gray wolf. Aside from the fact that Canis lupus is an intelligent and majestic creature, a cousin to “man’s best friend,” and a symbol of North American wilderness, wolves are just not the bloodthirsty creatures that populate so many fables, storybooks, and films. Yes, they’re carnivorous. But they pose little risk to humans. They do pose a threat to livestock, but only when wild prey has been depleted.

The history of wolves in America is not unlike the history of Native Americans. Originally, the mammal occupied most of continental America north of the Florida keys, including all of the eastern U.S. As human settlement and agriculture expanded between the 18th and 20th centuries, wolves followed their own “Trail of Tears” and gradually dispersed northward and westward. As hunters brought the American bison to near-extinction, wolves lost a major food source and also disappeared from the prairies. By 1960, guns and poison had eradicated the gray wolf from all of the U.S. except Alaska and parts of northern Minnesota.

Then they began a slow comeback. Bounties for wolf carcasses ended in 1947. In 1973, the Endangered Species Act gave them protection in Minnesota, Wisconsin, and Michigan. Then in 1995, amidst a flurry of publicity, 66 wolves were reintroduced to Yellowstone National Park and central Idaho.

Remote capture photo of one of Journey’s pups

Some of these wolves eventually migrated to northeastern Oregon, and three separate packs were soon confirmed there: Walla Walla, Wenaha, and Imnaha (Journey’s original pack).  There are now nine packs in Oregon with an estimated 60-something wolves.  Wildlife biologists tend to key in on whether a pack has breeding pairs, which determine the pack’s long-term viability.

Oregon Wild believes that much of Journey’s success in relocating and mating is attributed to his utilization of Oregon’s wild and roadless areas, where both roads and development are prohibited. This was a direct result of the 2001 Roadless Area Conservation Rule, initiated during the Clinton administration. 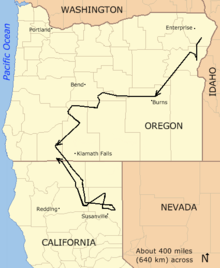 Despite the recent good news about Journey and other wolves in the U.S., their comeback attempts are fraught with difficulty. In 2003, due to political pressure from hunters and the livestock industry, wolves were reclassified from Endangered to Threatened (a weaker designation).  In 2005, the Bush administration diluted the original Roadless Rule and capitulated to livestock lobbyists, allowing states to determine their own roadless areas (Bush’s actions were eventually overturned by the courts). And Alaska has its own way to decimate wolves: in that state, wolves can be legally shot from helicopters during hunting season.

Unfortunately, despite public pressure and polling that indicates vast support for wolf reintroduction, there are still vocal minorities who would rather treat wolves, as the National Resources Defense Council phrases it, “like vermin rather than an endangered species.”

If wolves like Journey, his mate and pups, the lone wolf near Keno, and other reintroduced wolves are to survive and proliferate, it’s important that Americans speak out in their defense.  As thrilling as the story of a celebrity wolf is, we should be reframing “a wolf too famous to kill” as “the mammal too magnificent to murder.”  As Oregon Wild notes, “the extermination of wolves is one of our greatest environmental tragedies. But their return represents an opportunity at redemption.” 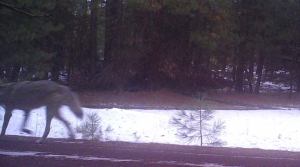 Here are a few links where you can learn more about OR-7 and make your voice heard (the first link will take you to an article featuring a SoundCloud button where you can actually hear the howl of Journey’s father, OR-4).

9 thoughts on ““Journey”: A Wolf Too Famous to Kill”