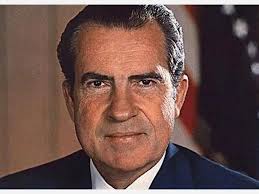 Here’s to the government of Richard Nixon
In the swamp of their bureaucracy they’re always boggin’ down
And criminals are posing as advisors to the crown
And they hope that no one sees the sights and no one hears the sound
And the speeches of the president are the ravings of a clown
Oh, here’s to the land you’ve torn out the heart of
Richard Nixon, find yourself another country to be part of

– Phil Ochs, from his song “Here’s to the State of Richard Nixon”

In my 5th grade class, I volunteered for a mock presidential debate. It was 1968, and the U.S. presidential election was nearing. The candidates were Republican Richard Nixon and Democrat Hubert Humphrey.

I didn’t know anything about politics, of course. I supported Nixon’s candidacy only because Joe Devereaux and some girl had already picked Humphrey. It was me and Kurt Carson in Nixon’s corner. I don’t remember much about Kurt, except that he was nearsighted and sported a crew cut. I do remember our parents were happy that we were stumping for Nixon.

Long story short, Kurt and I lost the debate. But only because most of the kids had parents who were Democrats.

It was the first and last time I supported Nixon.

I don’t like to disparage the dead. Most of us already know Nixon’s legacy. He abused his power multiple times in attempting to cover up clandestine and illegal activities by members of his administration. Staring impeachment in the face, he resigned in disgrace: the only American president to do so. Had he not resigned, his forced removal from office would have been deserved.

Nixon’s resignation was 40 years ago this weekend.

It seems our media loves to drag out the details of Watergate every time its anniversary rolls around. Certainly, it was one of the severest crucibles in American history. But it was also a high point, and turning point, of American journalism. It ushered in an age of so-called “gotcha journalism.” And every time the word “Watergate” is mentioned, the precocious microphone-fondling progeny of Woodward and Bernstein begin to salivate.

Had Watergate never happened, Nixon’s presidency would probably have received mixed reviews. He was in office when the Vietnam War ended…but only after he severely escalated it. He expanded Johnson’s progressive Great Society domestic reforms, but his war policy stimulated inflation and caused large budget deficits. Nixon had a golden opportunity to unite a country plagued with a generational and ideological gap. But his paranoia prohibited him from reaching out to his opponents. Instead, he did just the opposite: he compiled an “Enemies List” to target his critics.

Conservation: Nixon established the Environmental Protection Agency (EPA) and signed into law the Endangered Species Act of 1973. He was the first president to make environmental protection a priority.

Foreign Affairs: Nixon normalized relations with China. His tentative friendship with the Communist nation forced the Soviet Union to the bargaining table, resulting in the Strategic Arms Limitation Treaty (SALT I) and Anti-Ballistic Missile Treaty.

Human Rights: Nixon endorsed the Equal Rights Amendment (ERA) and Title IX of the Educational Amendments of 1972 to prevent gender discrimination, and ushered in large-scale, racial integration of public schools in the South.

Nixon also deserves praise for resurrecting himself after he left office. He was a tireless American statesman, meeting with numerous foreign leaders, including those in the Third World. Along with Jimmy Carter and John Quincy Adams, he was one of our most active “ex-presidents.”

Just a guess, but if Nixon were around today, I’m not sure he’d gain traction with the Republican Party. Not because of his “dirty tricks,” but because he’s closer to the center than the fringe. He’d probably end up like Jon Huntsman during the 2012 Republican primaries: the first to end his candidacy, after being accused of moderation, and for being bold enough to utter the word “compromise.”

Nixon may have been morally vacant, but he wasn’t dumb. I can’t see him surviving in the current political climate, where nearly half the voting public views climate change as a vast liberal hoax, and universal health care as an idea hatched in the bowels of Hades.

Gerald Ford’s controversial pardon of Nixon included the famous phrase “Our long national nightmare is over.”

But looking around today, isn’t there a different sort of national nightmare?