A year ago, on the heels of the tragedy at Sandy Hook Elementary School in Newtown, Connecticut, I posted an essay entitled America and Guns. I wanted to express my outrage at how our country was doing little or nothing about its exorbitant gun fatalities.  A year later and – believe it or not – I’m even more outraged.

On December 10, Mother Jones Magazine reported that 194 kids have been shot to death since Newtown.  Of these 194, the vast majority – 127 – were killed at home due to unsecured guns (this despite the National Rifle Association’s claim that more guns in the hands of adults will protect children).

On December 11, NBC News Investigations reported on December 11 that a total of 173 children under 12 years old had been killed by guns in 2013.

The Children’s Defense Fund reports that the gun death rate for children in the U.S. is 4 times higher than Canada (the next highest rate) and 65 times greater than Germany or Britain.

There are more statistics, some of them much higher than those I’ve cited.  Although not many.  Why not?  Because the NRA and its allies in Congress have pushed for legislation making it harder for the federal government to collect data.

After the Newtown horror, there was a lot of talk about having a “national conversation.”  President Obama called for a number of legislative measures, including a ban on military-style assault weapons, a limitation of 10 rounds on magazines, enhanced background checks, and the closing of loopholes in gun trafficking.

All of his measures were defeated in the Senate in April by a majority of Republicans and a handful of red-state Democrats.

After Newtown, the gun lobby tried to divert the issue away from guns, and pointed to mental health as the culprit.  Inadequate mental health resources may certainly be part of the problem – at least with regard to mass murders and murder-suicides.  But what have we accomplished this past year with legislation supporting mental health initiatives?

In an interview with National Public Radio (NPR), Sita Diehl, director of state policy and advocacy at the National Alliance of Mental Illness (NAMI), noted that 36 states increased their funding for mental health in 2013.  But she says this was “a drop in the bucket” after four years of radical cuts to mental health during a recession.  She said most of the funding in 2013 was through state bills being considered even before the Newtown shootings.  Diehl gives the feds “a C-minus, maybe a D.”  She said there’s been “lots of talk, no action.”

“After these sorts of shootings, there’s a lot of talk, and a lot of policymakers saying we need to do something about the mental health system,  But then, when push comes to shove and the budget debates occur, mental health seems to lose out.”

So here we are, a year later, with yet another school shooting in the news – Arapahoe High School in Centennial, Colorado.

Maybe it’s time we had another “national conversation.” 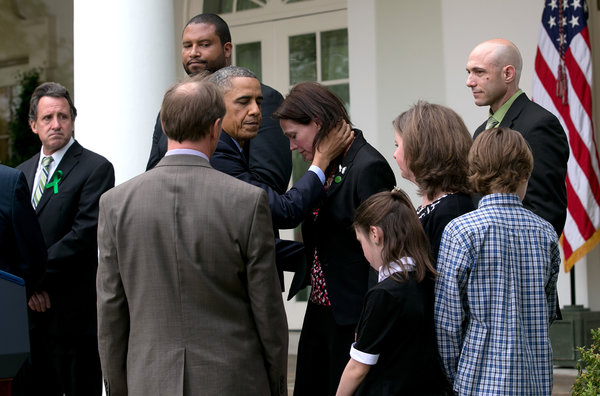