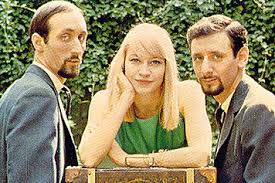 Next month will be 50 years since the Peter, Paul and Mary song “Puff, the Magic Dragon” reached number two on the Billboard Hot 100 charts.  What a  neat little song!  It was maybe the first “pop” record I ever owned.  I have a fuzzy memory of it being a 45 rpm yellow vinyl copy.  It wouldn’t be long before music would be all-things Beatles.  But in the spring of 1963, folk music was still very popular, and along with the Kingston Trio, New Christy Minstrels and others, PPM was one of the most popular folk acts.

The song has an interesting history.  According to Wikipedia, it had its start with an Ogden Nash poem, “Custard the Dragon,” about a “realio, trulio little pet dragon.”  A Cornell University student named Leonard Lipton borrowed Nash’s idea.  He penned his own poem in 1959 about a boy named Jackie Paper and his dragon friend Puff, who lived by the sea near a land called Honalee.  Jackie grows up and leaves behind the phantasmagoric world of childhood, leaving Puff alone and sad.

Lipton had a friend who happened to be Peter Yarrow’s housemate at Cornell.  He supposedly used Yarrow’s typewriter to write the poem, then forgot about retrieving the paper when he left the room!  Yarrow found the paper, provided music for the poem, recorded it with Paul and Mary in 1962, and a year later the song became a hit.  It’s just a simple homage to childhood, but it struck a chord in a lot of people (including yours truly, who hadn’t yet left Honalee!).  In a gesture you don’t often see anymore, Yarrow gave Lipton half the songwriting credit, and Lipton gets royalty payments even today.

Discussion of “Puff the Magic Dragon” isn’t complete without bringing the infamous marijuana controversy into the mix, however.  Marijuana??  Talk about leaving the land of Honalee!  Yes, even as early as a 1964 Newsweek article, this simple, uplifting tune was accused of having veiled drug references.  The name “Puff” was said to imply a puff on a marijuana cigarette.  “Dragon” was a reference to taking a “drag” on a joint.  Jackie Paper’s surname was supposed to imply rolling papers.  And so on.  I’m not sure if anyone ever suggested playing the song backwards.  Maybe that came later with the “Paul is dead” rumor.

Only a few months after “Puff,” Peter, Paul and Mary scored a number two hit with Bob Dylan’s protest anthem “Blowin’ in the Wind.”   They also performed the Pete Seeger-Lee Hays song “If I Had a Hammer” alongside Dr. Martin Luther King, Jr. at the March on Washington for civil rights.  So 1963 was a very significant year for the group.

I’d love to verify if that little piece of vinyl I once owned was actually yellow.  My mom saved a lot of things, but unfortunately she didn’t hang on to“Puff.”  Maybe she threw him out when she got rid of my Beatles lunchbox.