I left the town where I grew up several decades ago.  But last week I visited my mom, who lives in a retirement village there, and I decided to have an early Sunday morning jog through one of our old neighborhoods.  If you’ve ever re-visited a place from your childhood after a long absence, especially if little has changed, you know what a strange and exhilarating experience it can be.  Memories trickle in like dappled sunlight: the park where my dad taught me how to ice skate; the hill where my bike skidded on gravel and sent me tumbling to the pavement.  And you wonder if the houses might contain familiar faces.

As I approached our old house, I passed by a well-kept, single-level, yellow house with two front doors.  This was where Biff Schlossman had lived.  Biff was one of my childhood friends.  He was the only kid who was in all my classes from kindergarten through 4th grade (when we moved out of the neighborhood).  He was also in my Cub Scout den, and I’m sure we exchanged a couple birthday parties.  Physically, he was very striking, with brown skin and hair as black as night.

I’d passed by Biff’s house maybe a half-dozen times since we moved away in the late ‘60s, with only a glancing thought about him.  This time – with the tang of March chill on my skin, fresh air in my lungs, and a sudden feeling of nostalgia – I whispered to myself “I wonder whatever happened to old Biff.”  He was pretty bright, so I figured he’d joined the professional ranks as a doctor, lawyer, or successful businessman.  Thanks to the miracle of cyberspace (and to Biff’s unique name), I made a mental note to find out.

When I later plugged his name in the search engine, I discovered a few things.  One was that a very successful novelist had borrowed Biff’s name for the main character in one of his books.  We both knew Biff from grammar school, but neither of us knew the other (yes, it’s a small world).

The other thing I learned was that Biff wasn’t a surgeon, defense attorney, or bank president.  In fact, he’d apparently shunned the standard American Dream to pursue his own dream.  He’d become a classic back-to-nature hippie troubadour.  He’d moved to the mountains of Montana to ski, hike, and sing and play guitar in local bars and ski lodges.  And in the process he made a lot of friends, and became sort of a local legend.  It didn’t surprise me.  My biggest memories of Biff (besides his Indian looks) are his sparkling eyes, impish smile, and soft-spoken manner.

Sadly, I also learned that Biff died unexpectedly at a young age.  Looking into the past can have its sorrows.

I wish I’d have hooked up with Biff long ago.  I think we would have clicked even beyond childhood, as we shared a certain idealism and a lot of the same interests.  Sometime during our raucous post-pubescent years, we separately kindled a passionate appreciation of music.  And after college, I made my own trip out West, to backpack in the Cascades, and I drove right past where Biff may have been strumming guitar.  If I’d have turned left at Bozeman – the “road not taken” – who knows?  I didn’t have his musical talent or performing confidence.  But if not pulling up a stool with him onstage, maybe I could’ve tuned his guitar or offered a lyric or two.

Two memories stand out about Biff.  Both of them coincide with pivotal moments as I grew up.  If Biff were around now, I’d share both memories with him.  The first occurred in kindergarten.  Biff was Jewish, and I remember him talking about his faith during Show-and-Tell.  He brought in matzo crackers to share with the class.  Even though they were unsalted and unlike our regular diet of sugared cookies, we all liked them.  More importantly, Biff’s presentation was my first awareness that people could have differences beyond the physical.  And that this was a good thing.  It’s a lesson I’ve had to relearn time and again.

The other memory was when we were nine and attended summer camp together.  Our moms signed us up to go as buddies and cabin bunkmates for two one-week stints.  It was the first time either of us had been away from home for longer than a night.  I was pretty homesick, but Biff, being more outgoing and adventurous, made friends with another kid in our cabin.  This kid (I’ll call him Eddie) was maybe a year older, from the rougher side of town, and he had a swagger.  I didn’t like Eddie, but he liked Biff, and they kind of teamed up.  Of course, my homesickness was even worse after this.  But I distinctly remember Biff approaching me later in the week and saying “Pete, I don’t think Eddie likes me anymore, he hasn’t talked to me in a while.”  Maybe it’s rose-colored glasses.  But this may have been his way of trying to make me feel better.

I didn’t return for that second week of camp.  I was just too homesick.  In hindsight, I wish I’d have forced myself, because my copout probably started a pattern of avoidance.   But Biff did return.  I’ve always wondered how he fared.  Our family moved only a few months later, so I never found out.  For all I know, those wooded hills of north-central Ohio helped inspire Biff’s later migration to Big Sky country.

I never saw Biff again, either.  But friends from youth have a way of searing themselves into your consciousness.  Maybe because, when we’re kids, we’re not aware of the concept of time.  When we’re kids, neither the past nor the future are relevant.  We haven’t yet learned how to reflect on things, good or bad.  And we don’t worry about what’s in front of us.  We only live in the present.  For most of us, it’s just a brief period in our lives.  But it’s where you can find true happiness.

Here’s to you, Biff. 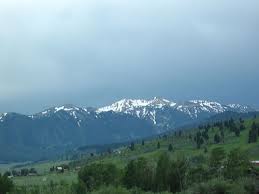